Adding To It’s Wealth of Oil South of The Country, Nigeria Begins Drilling For Oil In The North 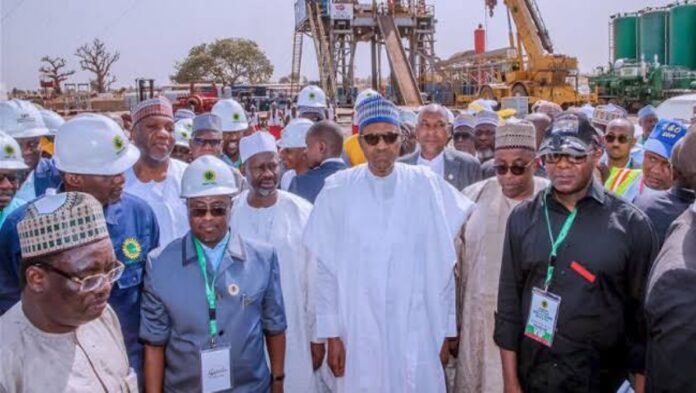 Nigeria on Tuesday began drilling for oil and gas in the northeast, setting a precedent for the African oil giant which has been developing large deposits in the south for decades and output has been falling.

President Muhammadu Buhari visited the Kolmani field in Gombe and Bauchi states, with estimated reserves of over a billion barrels of crude oil, to inaugurate the well.

“The successful discovery of the Kolmani oil and gas field by NNPC [Nigerian National Petroleum Corporation Limited] and its partners has finally surpassed all odds,” Buhari said in a statement after a long effort to find commercial oil and gas outside the delta basin of Niger.

In addition to drilling, the project, which has attracted $3 billion in investment, aims to open an oil refinery, gas processing plant, power plant and fertilizer plant, according to the president’s statement.

Also, read; Germany to Withdraw Troops From Mali by May 2024

In his comments, Buhari also called on the oil company and its partners to “ensure that all lessons learned from our years of experience as an oil-producing country are used to ensure a harmonious relationship with local communities.”

Oil production in Nigeria began in the 1960s in the southeastern region of the Niger Delta.

Decades of production have enriched government officials and generated huge profits, particularly for large foreign companies, but most Nigerians, particularly in the oil-rich delta region, still live in poverty.

The region suffers severely from pollution, and tens of thousands of people make their living from the theft of crude oil from pipelines or at sea, from illegal refineries that have sprung up in swamps and jungles, and from the black market sale of fuel that causes environmental disasters.

Industry uncertainty has dramatically increased the cost of Nigerian oil production, with major foreign oil companies giving up their stake in onshore oil fields to focus on offshore operations.

In September, Nigeria lost its position as the largest oil producer on the African continent to Angola as its oil production continued to fall despite higher prices related to Russia’s attack on Ukraine.