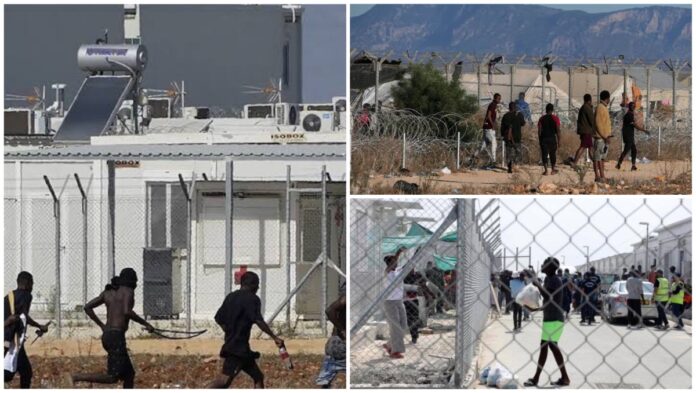 Cypriot police fired tear gas on Friday after a fight broke out in a reception center packed with migrants, sparked by a dispute between different nationalities, officials said.

One person required hospital treatment after being injured in the Pournara refugee camp on the outskirts of the capital Nicosia.

People threw rocks and objects at each other, forcing many to flee in panic, and firefighters rushed to put out a blaze that sent clouds of smoke into the sky. Tensions “later calmed down,” police said.

Police Chief Stelios Papatheodorou attributed the violence to overcrowding in the center, which more than doubled its original capacity of 800 people.

“Police are doing everything they can to protect the area and the camp residents,” Papatheodorou said.

Cypriot news agency Philenews said clashes had erupted between asylum seekers from the DRC and Nigeria, two of the largest migrant groups in Cyprus.

EU member Cyprus says it is at the forefront of the bloc’s irregular migratory flows and last year recorded the highest number of asylum seekers by population.

The small EU state has lobbied in Brussels to take action against the “disproportionate” number of asylum seekers it is receiving.

In southern Cyprus, ruled by Greek Cypriots, with its 850,000 inhabitants, new asylum applications multiplied last year to more than 13,000.

In March, a report by the Cypriot Commissioner for Children’s Rights detailed chronic overcrowding, appalling sanitation and reports of scarce food rations in the Pournara camp, prompting authorities to pledge to work to improve conditions.