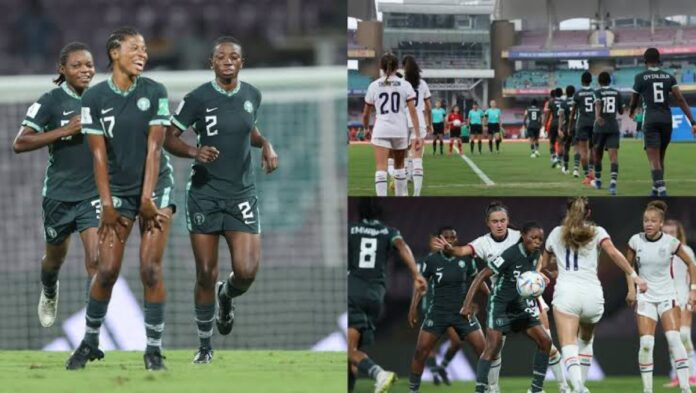 Nigeria’s Flamingos have qualified for the semi-finals of this year’s U-17 Women’s World Cup in India after defeating the US on penalties in Friday’s quarter-finals.

This serves as the team’s first ever semi-final qualification, sparking praises from fans who have since called for their appreciation and further improvement.

After 90 minutes of football ended 1-1, the game went to penalties, with the Flamingos triumphing 4-3 and qualifying for the first spot in the semifinals.

The Flamingos will now face either Colombia or debutants Tanzania in the semifinals scheduled for Wednesday, October 26.

Omamuzo Edafe gave the Flamingos the lead in the 27th minute with a penalty after a foul on Amina Bello in the area.

Five minutes from the end, the USA drew level thanks to Amalica Villarreal.

As both teams failed to find a winner in the second half, it went to penalties, with the Americans losing twice and the Flamingos losing one of them.

And Edafe converted the winning penalty to put Nigeria in the quarterfinals.