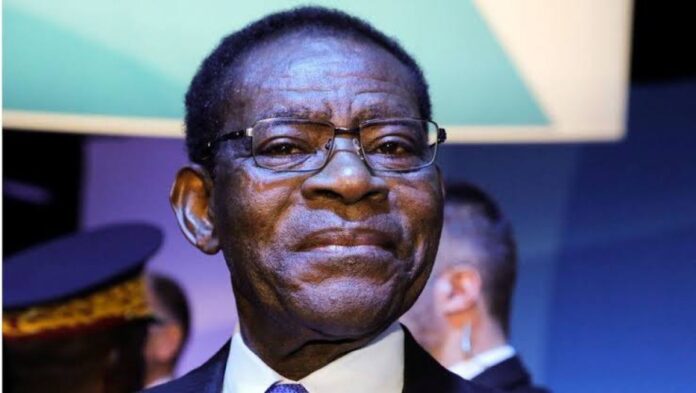 Teodoro Obiang Nguema Mbasogo was re-elected President of Equatorial Guinea for his sixth term with 95% of the vote.

Equatorial Guinea’s President, Teodoro Obiang Nguema Mbasogo, has been re-elected to a sixth term as the West African country’s president.

Electoral authorities announced on Saturday that he had received 94.9% of the vote, which translates to a turnout of 98%.

Opposing candidates Andrés Esono Ondo and Buenaventura Monsue Asomo received around 9,700 and 2,900 respectively out of around 413,000 votes in Equatorial Guinea.

Obiang’s ruling party in Equatorial Guinea also won all seats in the National Assembly and Senate.

The West African country of 1.5 million people has only had two presidents since gaining independence from Spain in 1968. Obiang overthrew his uncle Francisco Macías Nguema in a coup in 1979.

Obiang ruled for over 43 years and is the longest-serving head of state in the world without royalties. The 80-year-old was never officially re-elected with less than 93% of the vote.

In a country where there is only one legitimate opposition party, Obiang exercises near-total political control. Human rights groups accuse him of silencing dissidents and cracking down on his opponents.

Critics say protests are banned, the media is tightly controlled and political opponents are often arrested and tortured.

The discovery of offshore oil in the mid-1990s made Equatorial Guinea the third richest country in sub-Saharan Africa in terms of per capita income as of 2021.

However, wealth remained concentrated in the hands of a few families. The country is also known for bribery, ranking 172nd out of 180 countries in Transparency International’s 2021 Corruption Perceptions Index.

The president’s son, Teodoro Nguema Obiang Mangi, whom observers see as a possible successor, was convicted of embezzlement by a French court in 2020. Although, Obiang denies any wrongdoing.