The Legacy of Badagry Slave Port, Nigeria’s Point of No Return 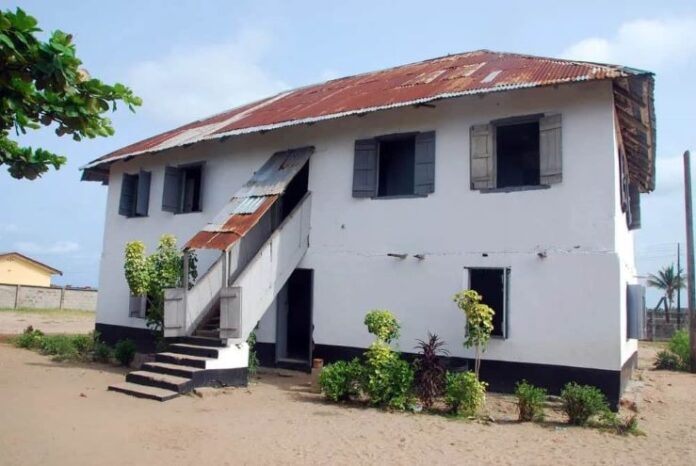 Badagry a border town between Nigeria and Benin, developed into a bustling slave port in west Africa as a result of European traders purchasing and transporting people to labor on plantations in America.

The Badagry Heritage Museum, which houses exhibits on the slave trade between Africa, Europe, and America, provides information on the history of that trade for visitors to the Badagry Slave port.

Nigeria is presently regarded as the “Giant of Africa,” a melting pot of different tribes and ethnicities that are united by a shared national identity as a result of colonization.

The Benin Monarchy was also a notable kingdom at the time. These tribes occasionally quarreled with one another and engaged in internal warfare, which frequently resulted in raids, the capture of slaves from battle, and/or the growth of one kingdom from another.

The Portuguese began exploring the West African coast in the 15th century. When they first arrived in Nigeria, they initially established up camp along the Badagry coast, about an hour’s drive from mainland Lagos, to trade palm oil, ivory, dyewood, and other goods with the locals.

However, by 1650, this traffic in goods had bitterly transformed into a trade in people. The descendants of those from the region, as well as those from neighboring West African nations like Benin, Ghana, Senegal, and Gambia (all to the west of Nigeria), who were also taken in the slave trade were left with a terrible and enduring legacy as a result of this.

The growth of plantations in America and the newly colonized Caribbean islands, as well as the need for more labour to create the “new world,” are factors that led to the rise of chattel slavery.

Other European nations, including Britain, France, Germany, and Spain, joined in as trade increased.

Each of them had a stake in the transatlantic slave trade, and they frequently engaged in internal warfare to seize control of the African countries that the Portuguese had initially attacked.

The route from West Africa to the British colonies and America was established by Britain in the 1760s when the demand for slaves was at an all-time high and was typically satisfied via auctions and slave markets.

During that time, European traders on the coast of West Africa rarely traveled inland due to the threat of disease or violence.

As a result, the capture of slaves was entrusted to African dealers, who were frequently under the control of village rulers.

In Badagry, the slaves were housed in Brazilian barracoon-style slave cells as they awaited a longer journey, as opposed to the numerous slave castles that dot Ghana’s coast.

After another 30-minute walk, they would cross a lagoon to the “point of no return,” where British ships were waiting to take them to the other side of the planet.

Several museums exist today in Badagry and one is located in Calabar to preserve the memory and legacy of this horrible period in human history.

This coastal settlement, which dates back to 1425, was well-known for its slave markets.

It has made significant efforts to protect its cultural legacy and has established monuments and museums where history buffs, tourists, and people descended from Africans may now come to learn about the tragedy and promote past-pain healing.

Important locations to visit when in Badagry are:

This museum, which was built in 1863, displays artifacts and records from Nigeria’s history before colonization.

The history of the transatlantic slave trade is covered in a particular section that allows visitors to virtually step into the shoes of those who were affected by it.

The museum’s first Christian Mission House in Badagry is also situated there. This significant historical site is situated in the heart of the tourist destination, in what is known as the “neighbourhood of white men” in Yoruba dialect (Adugbo Oyinbo).

Eight galleries of the museum, each named after a distinct phase of the slave era, contain artifacts from the pre-slave, slave, and post-slave eras.

The Badagry people’s artifacts, documents, and culture are also on display at the museum. Learn about those who battled to abolish the slave trade as well as the methods used to kidnap, sell, punish, and transport slaves at the museum.

The story of slave trade in Badagry would be incomplete with mentioning Seriki Faremi Abass, a former slave who was kidnapped and sold to Williams, a Brazilian slave trader, to work as a domestic slave in Brazil.

Seriki Williams Abass established Aiyetoro and Idogo while ruling Badagry for 24 years. He was initially born in Ijoga Orile, a town in Yorubaland. The town is located in South West Nigeria’s current Ogun State.

His father’s name was Fagbemi and he (Abass) was born Faremilekun. At the age of six, he was kidnapped by the Dahomeans and sold into slavery.

Dahomey was the previous name of the nation that is currently known as the Benin Republic. Benin Republic was given the name Dahomey in 1975.

Abass was the name of Seriki Williams’ first owner in Dahomey. He was both a scholar of Islam and a slave trader. Later, Abass sold him (Seriki) to Williams, a European slave trader.

Due to the fact that slaves take on the names of their owners, Faremilekun, Fagbemi’s son, became known as William Abass.

In those days, a slave’s identity was the first thing taken from him. No name is given to a slave. Slaves are identified by their owners’ names or by the names they are given by their masters.

For that reason, Faremilekun adopted the names of Williams and Abass, his two masters, thus making is new name Williams Abass.

Before being sold to the European slave dealers, up to 40 slaves were kept in each cell of the Brazilian Barracoon as a temporary prison.

He (Seriki Faremi) was taken to Brazil by Mr. Williams as a slave from Abass. Mr. Williams discovered there in Brazil that he was unique in some way.

Therefore, he took the youngster to his house and turned him into a domestic slave while he sold his other slaves since he refused to resell the boy.

Plantation slaves work on the land, whereas domestic slaves are employed in their master’s home. Williams Abass, also known as Faremilekun, was well-treated by Mr. Williams (The European), who also taught him how to read and write.

The youngster was so brilliant that he was able to master the languages of English, Dutch, Portuguese, and Spanish from Mr. Williams and his Brazilian friends.

When Wiliams Abass was a young man, Mr. Williams called him and offered to release him on the condition that they continue to collaborate as slave trade business partners and Williams Abass agreed.

Due to this agreement, Mr. Williams sponsored Seriki Williams trip back to Africa and the first location Seriki made settled at in Africa was the colony of Lagos. He lived at OFIN, around Isale Eko in Lagos Island.

He maintained commercial ties with Mr. Williams, his previous master in Brazil, who continued to bring his slave trader friends to him.

He had business connections all the way to Ketu in the current Benin Republic. Seriki Williams Abass continued his escapades and made the decision to settle in Badagry due to the thriving slave trade there.

The Brazillian Barracoon was constructed for Seriki Abass in Badagry with the help of Mr. Williams, his old European owner, and his friends. He also spent his own money, and his slaves provided the labor.

The barracoon now exhibits artifacts and wrought iron chains in a variety of sizes and shapes that have been used on men, women, and kids.

This place has a good history background and it is advisable to visit if you ever find yourself in Badagry.

Established in 1502, this market served as a hub for commerce between European and African slave dealers.

On each “Vlekete market day,” over 300 persons were bought and sold into slavery, making it at the time the biggest slave market in West Africa.

For commodities like iron bars, mirrors, dry gin, whiskey, and firearms, the slaves were typically auctioned off.

Similar items used by the slave dealers to control their captives are on display at this museum.

Examples of chains include handcuffs for babies used to bind the children together so they don’t bother their parents while they labor, and a mouth lock to stop the slaves from talking to each other and consuming sugarcane off the plantation.

A fascinating truth is that, despite Chief Mobee’s support for the slave trade, his son Chief Sumbu Mobee worked to end it.

This city, which was formerly known as Akwa Akpa in the Efik language, is situated close to the Calabar and Great Kwa rivers as well as streams that flow into the Cross River, which originates in Cameroon.

Prior to the transatlantic slave trade era, when it became one of the main ports for the transportation of slaves, primarily from Igbo country, aboard ships that were predominantly owned by Bristol and Liverpool merchants.

It was also known for its seaport where items like palm oil was handled.

On the location of the slave trade facility in Marina Beach stands this museum.

The Esuk Mba Slave Market in Akpabuyo, which depended on slave raiding and enslaved prisoners of war or parents who sold their children in the hope that they may find a more lucrative life elsewhere, is the first of the museum’s four primary exhibitions.

The next stop is the Chains and Shackles museum, which displays the tools used to restrain slaves and deter rebellion while they were transported over long distances.

Third, the Procurement of Slaves exhibition illustrates the cash and barter system used to trade the slaves, including brass bells, gongs, flutes, and more in addition to copper bars, Dane weapons, and other items.

The inventive methods that slaves were accommodated on a ship are also displayed in this exhibition. Last but not least, there is a display on the abolitionists who fought to put an end to the transatlantic slave trade.

The exhibit tells the story of abolitionists like William Wilberforce, Thomas Clarkson, and Granville Sharp who opposed slavery because they believed it to be ethically and morally repugnant.

These men and others like them proposed 12 ideas that eventually led to the abolition of slavery in Britain on March 25, 1807.