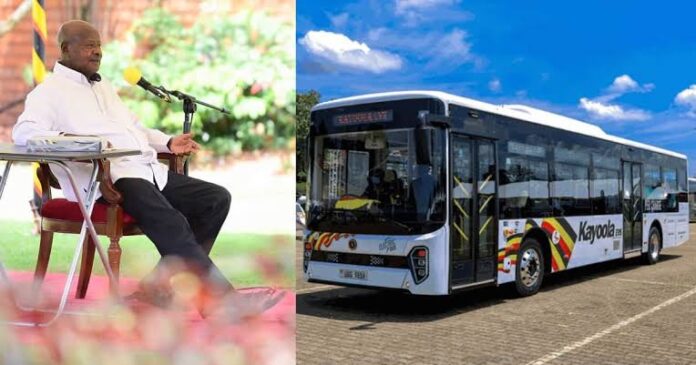 President Museveni has urged Ugandans to switch to electric cars as the country joins global powers to stem an impending recession amid concerns about global climate change.

“That’s the answer. The right way is to switch from gasoline to electric cars, and we’ve already started to do that,” said Museveni.

A five-seat hybrid Kiira Electric Vehicle (EV) made in Uganda costs more than Shs100 million in a country whose GDP per capita reached just $1,046 at the start of the 2022-23 fiscal year, government data shows.

But Museveni said that one of the Kiira electric vehicle designers, Paul Musasizi, told him that, for example, an electric bus consumes 360 Shs per km, which is nearly five times cheaper than a similar fossil-fuel-powered bus (at Shs1, 600 per km). .

“Electric vehicles are cheaper, cleaner, pollution-free and appear to have lower maintenance costs,” he noted.

Museveni appeared to echo his earlier jab at the COP26 declaration by world leaders to have zero emissions from new cars in key markets by 2040, saying, “This is the solution we must pursue.”
Less than 2% of Uganda’s more than 44 million people own a car, with fuel prices approaching Shs7,000 (US$1.8) in a troubled economy.

“That fuel will likely remain high. Even if our gasoline is here, we have to sell it at the world market price minus transportation costs,” explained Mr. Museveni.

The president pointed out that Uganda needs Shs 20 billion to develop more affordable electric cars, while crisis after crisis has also prompted the government to breathe new life into Uganda’s long-dead rail networks.

The President stated that when people become tired of buying and using expensive diesel, they switch to train. Fortunately for Pakwach-Gulu-Tororo, the rail system exists, and they are fixing it,” he said.

Mr. Museveni added that the goal is to now fix the old rail gauge from Tororo to Kampala. However, what will present a challenge could be Kasese since the railway line had been destroyed, and we have to build an entirely new one there.

Museveni, 77, believes that endless pandemic outbreaks and the current global warming, marked by forest fires and temperatures exceeding 40 degrees Celsius in parts of Europe, is a price the universe is paying for “man-made problems caused by man’s attempt to defy God’s power”.

Unprecedented climate change has already taken its toll on Uganda, and food production is expected to fall by twice as much by the end of 2022.

Warning the nation about the challenges, Museveni stated that there is an issue it seems to be the biggest and that is the lack of resources in situations such as that described above.