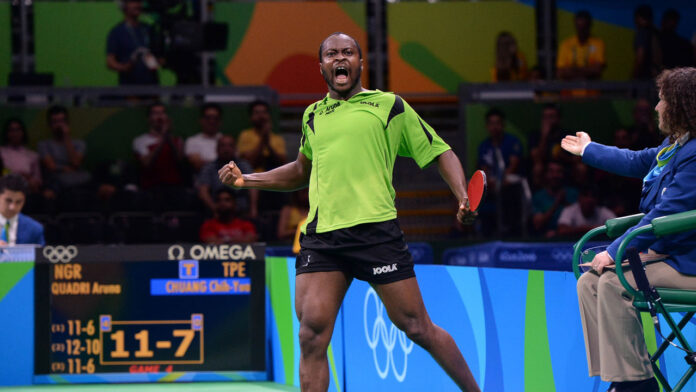 Quadri Aruna breaks yet another record, achieving a great milestone as he finds himself on the list of top 10 table tennis athletes in the world. The list, released on Tuesday, May 3 by the International Table Tennis Federation (ITTF), ranked all table tennis experts in the world in a top ten list.

Recall that the ITTF Executive Committee had earlier approved a new world ranking system that places the very best table tennis players in the world on a top 10 list. This list contained the name of Quadri Aruna, who has recently become the face of the Nigerian table tennis game, as well as the increasing popularity of the game in Africa. Interestingly, the World Table Tennis (WTT) has a lot to say about Aruna, especially as he has been in the game for a considerably long period of time before finally making it into the top 10 list.

“Aruna has truly been mister consistent in both his performances and his participation,” the WTT noted. According to the WTT, several reasons added up to Aruna being added to the list, including what was tagged as his “perfect delivery, and consistency” in the game.

While speaking about Aruna’s apparent skills and activeness in the game, the WTT noted certain reasons that have made him a star in the game. “It has included sensational headlines such as taking out China’s rising stars succeeding at the 2022 WTT Star Contender Doha and a quarterfinal appearance at the World Table Tennis Championships Finals,” WTT said. “It looks like the 33-year-old is just getting started,” the organization added.

Speaking of a record-breaker, Quadri Aruna’s record goes beyond the list as he officially becomes the first African, Nigerian, and black player to be ranked in the top 10 in the world table tennis ranking.

In the women’s list, Egypt’s Mariam Alhodaby is the highest-ranked African female player, rising to 40th in the most recent rating, while Nigeria’s Offiong Edem climbed 10 places to 89th.