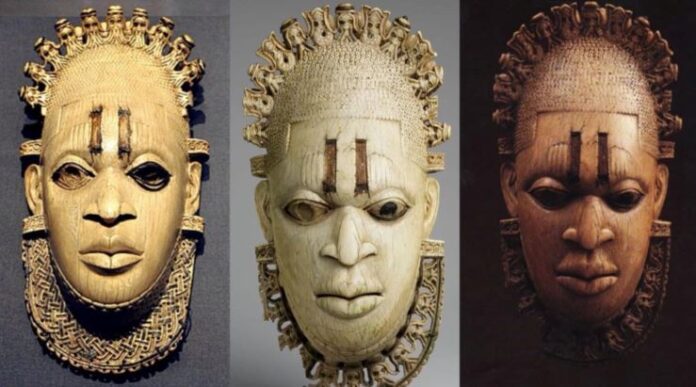 Did you know that Africa’s first major war was fought by a brilliant lady disguised as a man? Yes! Her name was Queen Idia.

She was a great woman of morality who desired the best for her son and went to any length to ensure his victory in every manner.

Because of her mastery of magic and medicine, she was able to lead her son to the throne and fight key battles.

Queen Idia is yet another heroine whose sacrifice shaped the Benin Kingdom.

The Ancient Benin Empire in Nigeria was one of the oldest and most developed states in West Africa’s coastal region.

Till today, the Benin empire portrays an image of an African society that was reasonably well-organized and sophisticated prior to the great European colonial interlude.

The Benin Empire climbed to its zenith thanks to the valiant contributions and sacrifices of some exceptional men, women, leaders, and warriors. Most of them went so far as to lay down their lives for the sake of the kingdom’s advancement.

Benin’s 15th Oba married Queen Idia, who was born in Uzeghudu (modern-day Edo State) and in 1504, she gave Oba Ozolua only one son, Prince Osawe, also known as Esigie.

Oba Ozolua, first known as Okpame and later Ozolua n’Ibaromi (Ozolua the Conqueror), was an Oba of the Kingdom of Benin from 1483 to 1514.

He considerably extended the Kingdom through fighting and developed relations with the Portuguese Empire. He was a prominent Oba in both the history of the Kingdom of Benin and in regional mythology and festivals.

Prince Okpame was Ewuare’s third and youngest son, and he considerably extended the Kingdom of Benin during his reign, which lasted from 1440 until 1473.

Following Ewuare’s death, his eldest surviving son, Esi, was murdered by a poison arrow at his coronation, and his second oldest son, Olua, ruled for seven years with severe domestic discontent.

After a brief reign of a group of chieftains, Prince Okpame was named Oba (in either 1480 or 1483) and assumed the name Ozolua.

His reign was distinguished mostly by the Kingdom of Benin’s tremendous military growth. This includes a successful attack against Owo’s Kingdom.

In the mid-15th century, Oba Ozolua died leaving the Kingdom with two rivals for the throne: Iduhor and Esigie.

The kingdom of Benin was thrown into a commotion because of the death of the king.

However, because Idubor did not cry soon after delivery, Esigie was the first to be reported to the King. By the time Idubor wept, the King had concluded proclaiming Osawe as the first son.

Idubor was unhappy and furious over his treatment as a child. He begged his mother repeatedly if his father was his true father and why he was so cruel as to take away his birthright in such an awful manner.

However, because of his birth and the events surrounding it, Idia raised Esigie to be the heir to the throne.

While Idubor was sent to Europe to gain schooling and learn more about white men’s customs, Esigie stayed at home, clinging to his mother’s wisdom and learnings. When Idubor returned from Europe, no one in the palace recognized him.

Meanwhile, Esigie had grown to be a giant and the ruler of his father’s palace. His understanding of magic and medicines, as well as his contacts with royal officers and the Oba’s army, had earned him a seat on the throne.

Idubor refused to bow down to his brother, Esigie. At first, he intended to make Udo the capital of the Benin kingdom, with himself as King.

Idubor stayed deafeningly silent when Esigie opposed him naming himself King. It caused a significant rift between him and his brother.

The resulting civil war seriously harmed Benin’s prestige as a regional power, as well as Benin City’s position as the kingdom’s political and cultural capital.

Taking advantage of this vulnerability, the neighboring Igala peoples launched warriors across the Benue River to seize control of Benin’s northern provinces.

Esigie eventually beat his brother and conquered the Igala, restoring the kingdom’s unity and military might.

His mother Idia shared much of the credit for these successes, since her political advice, as well as her mystical talents and medicinal knowledge, were regarded as key components of Esigie’s combat victory.

To reward and honor her, Esigie established a new post inside the court known as the iyoba, or queen mother, which granted her substantial political rights, including a separate palace with its own staff.

Idia, and later Iyobas, exercised significant power as the king’s mother. Until recently, the queen mother had no other children and devoted her life to rearing the oba’s first son, a job she was meant to play even before her own birth. As a result, queen moms were regarded as crucial to the safety and well-being of the oba, and thus the kingdom.

Each of the brothers gathered a small army capable of putting down any domestic insurgency. Queen Idia made physical and spiritual moves to have Esigie as the Oba as the late Oba’s wife and even the queen mother of the next Oba.

She helped Esigie organize an army and he defeated Idubor and became Benin’s 16th monarch.

Esigie grew into a very powerful Oba with his mother by his side over time. She protected and advised her son on how to develop and improve the mighty Benin Kingdom.

Queen Idia, a lover of the arts, was responsible for several inventions that are still part of Benin’s cultural heritage.

The historic Idah battle of 1515 could not have been won if Queen Idia didn’t fight with her son and won the fight for him while disguising herself as a man. Not to mention that she protected her son from multiple assassination attempts.

Also, Esigie was the first oba (about 1504 AD) to speak any non-native language (Portuguese). The Portuguese first came to the Benin Kingdom in 1485 and knowing Portuguese was critical in dealing with these new western trading partners.

Queen Idia shows support to Esigie During His Illness

According to stories, after his defeat, Iduhor committed suicide by drowning himself in the Udo Lake. He dangled his necklace from a tree limb before plunging into the lagoon, the costly bead necklace emblem of power in Benin land.

Only the Oba could have such trophies of dead or captured kings and nobles, but in his joy over his win, Esigie chose to try it on his neck to know if it was his size.

His mother, Queen Idia, quickly located a Yoruba Babalawo (mystic) in the Ugbo/Ilaje riverine area and brought him to Benin to treat the King’s spiritual illness.

He cured the Oba’s condition, and the Queen honored him by allowing him to stay in Benin permanently to continue his services. He settled in the Ogbelaka quarters, where his descendants have thrived to this day.

The Modernization of an Ancient Benin Custom

According to an old tradition, if an Oba is declared, his mother must be assassinated since she poses a threat to the future King and throne. The cultural death warrant issued against Esigie’s mother remained in effect after he became Oba.

It was the situation Queen Idia found herself in after Oba Ozolua’s death. The burial had already been dug, and her time to visit her ancestors’ land was approaching.

Esigie requested the support of his friend, Benin’s 17th Ero, Omoregie Ero. In 1504, he helped Esigie save the Oba’s mother, Queen Idia.

Omoregie Ero had a hidden groove called Aro-Osun in Idumwum-Oro in Uselu. He kept Idia, Esigie’s mother, there for a long time.

In the same light, Oba Esigie tried to abolish the horrible custom of killing Oba’s mother.

Queen Idia died in 1550, leaving Esigie heartbroken, but not without the support of Elaba, Esigie’s favorite wife, whom she had carefully educated to take her place.

Esigie commissioned the palace’s royal carvers to carve a statue in honor of the woman who was not only a mother but also a war general, a priestess, an advisor, and a patron of the arts and culture.

The renowned Ivory mask, which served as the logo for the 2nd World Black and African Feast of Arts and Culture (FESTAC) in Lagos State, Nigeria, in 1977, brilliantly captures Queen Idia.

The mask’s superb perfection attests to the Benin people’s high standard of living and a higher level of civilization prior to colonization.

The most common depiction of Queen Idia is that of a warrior. Although there are artworks that depict both her military and incredibly feminine sides.

It depicts a woman with everything: power, skill, loyalty, and feminine beauty.