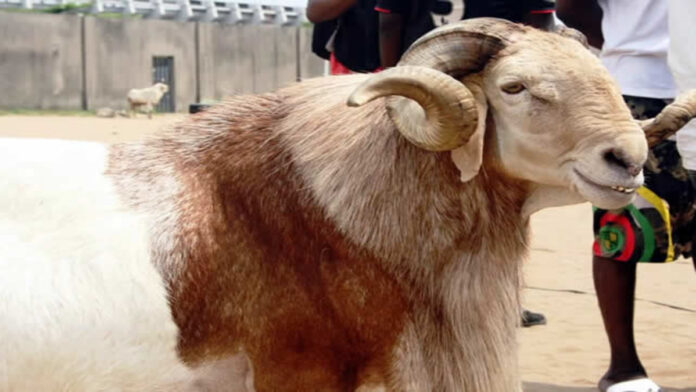 A ram was recently arrested by local police for killing a woman in South Sudan, East Africa. According to reports, the ram was also sentenced to three years in Prison for the crime.

After supposedly knocking down a 45-year-old lady to death; the five-year-old ram was arrested by the local police after which it had its time in court.

While a customary court in Rumbek East County had fined its owner, being kept in police custody was seen as a reasonable punishment for the Ram.

According to sources, the Ram was discovered alongside the lifeless body of the victim. It had reportedly knocked her down, then pounced on her as she struggled to recover from its attack.

Unfortunately, while she lay on the floor gasping for air and attempting to escape; witnesses claimed the ram pounced on her ribs as she attempted to stand up. The injury to her rib affected her ability to escape as the ram angrily knocked her down continuously until she lay, unresponsively.

A Deal For Settlement

A customary court in South Sudan presided over the case on Monday. It asked that the issue be discussed and settled between the family of the deceased and the “unnamed owner” of the ram.

While the discussions supposedly proceeded; reports claimed that the owner of the “angry cow” pledged to give five cows as compensation. Both parties agreed to this with the customary court; passing the verdict with the condition that one cow is pledged to the court.

The ram will be held in police custody for the next two weeks; according to Lakes State Police Spokesperson Elijah Mabor, to let the owner pay the charges.

“It will remain in custody in the meantime. Either the court will decide to release the ram to be given to the owner or it will be kept until the fine is paid,” he said.

Any domestic animal that has killed a person in Lakes State is handed as recompense to the deceased’s family, according to customary laws.

Last Monday, a law professor at the University of Juba told the press that; the arrest of a ram by Lakes State police was the proper procedure, as required by law.