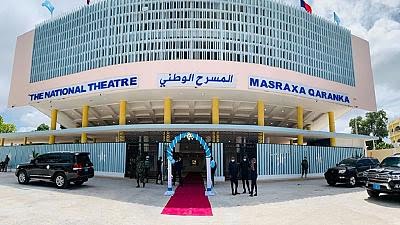 The National Theater in Somalia has been reopened following recent renovations on the facility located in central Mogadishu, the country’s capital.

According to reports, some businesses, the chamber of commerce, and civilian workers contributed to the renovation of the theater.

The reopening of the facility was timed to coincide with the country’s 60th independence anniversary and was attended by President Mohamed Abdullahi Farmaajo and other top government officials.

The president cut the ribbons for the reopening before joining a large audience to watch the performances.

The Theater in Somalia will be a showcase of the country’s rich culture and traditions.

According to a BBC report, the theater has a history of closures with its first coming in the early 1990s when the country descended into civil war and Mogadishu became a no-go zone.

The facility was later intermittently renovated by the local authorities.

In 2013, the Somali and Chinese governments signed an official cooperation agreement as part of a five-year national recovery plan in Somalia that will see the Chinese authorities reconstruct several major infrastructural landmarks in Mogadishu and elsewhere, including the National Theater.

Following the reopening of the National Theater in Somalia after reconstruction by the Chinese, the facility was once again abandoned due to security concerns, with a 2017 documentary documenting the structure’s decrepit state.

Various government regimes made pledges to ensure national security and rebuild the country, which is still under attack by the insurgent group Al-Shabaab to varying degrees.

The reopening of the National Theater in Somalia has brought joy to Somalis who see the facility as an important cultural landmark in the national capital.