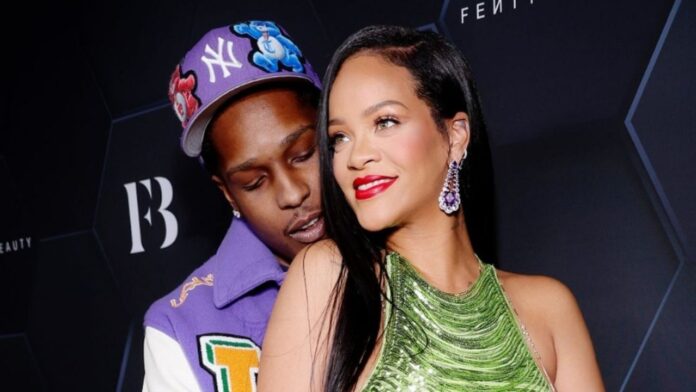 We earlier reported the rumors about the split between Rihanna and her boo A$ap Rocky over cheating alleges.

It was earlier said that A$ap rocky was cheating on Rihanna with her Fenty designer, Amina Muaddi. However, both Amina Muaddi and Rihanna’s insider sources have debunked the rumors.

Rocky and Amina also collaborated on their AWGE x Amina Muaddi shoe collection back in 2020.

During an interview with the Vogue, Muaddi who has supplied her famous footwear to stars like Dua Lipa and Kendall Jenner said that she and Rocky had known” each for so many years” prior to launching the project.

The rumors were sparked on April 14th by Louis Pisano, a fashion blogger, who took to Twitter alleging that the “Umbrella” hitmaker caught Rocky cheating with shoe designer Amina Muaddi.

Although Neither Rihanna nor Rocky spoke directly on the separation rumors, a source close to Rihanna told TMZ on Friday that the allegations were; “100% false on both counts” and reiterated that the rumor was “1 million percent not true.”

According to the insider, Rihanna and Rocky’s relationship is “fine” and still going strong.

“I initially assumed that fake gossip–fabricated with such malicious intent–would not be taken seriously. However, in the last 24hrs I’ve been reminded that we live in a society that is so quick to speak on topics regardless of factual basis and that nothing is off-limits.

Not even during what should be one of the most beautiful and celebrated times in one’s life,” she added referencing Rihanna’s pregnancy. “Therefore I have to speak up as this is not only directed towards me but is related to people I have a great amount of respect and affection for. While Rih is continuing to live her serene, best-dressed pregnancy life and I go back to business—I wish everyone a beautiful Easter weekend!”