Seven Colored Earth: A Must See in Mauritius 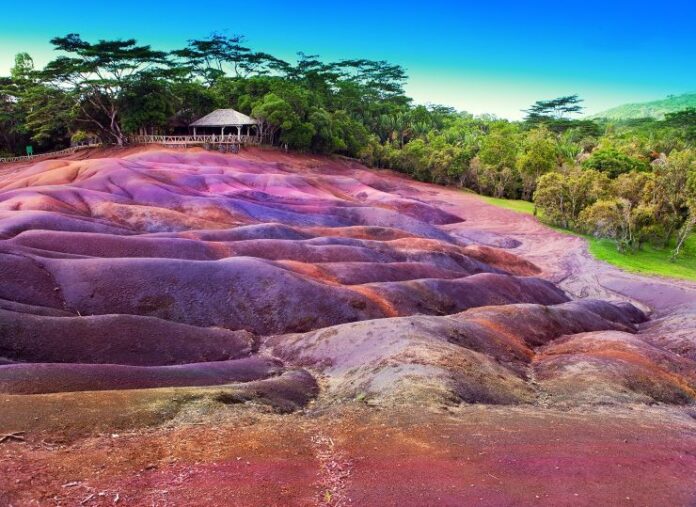 One of the most impactful factors in the economy of Mauritius is tourism and the seven colored earth in Mauritius even makes the country worth visiting.

Mauritius is renowned for its beautiful beaches and scenic surroundings. It’s a location where individuals can go to fully disconnect from the dealings of life and just bask in the beauty of nature.

When tourists visit Mauritius, most of them stop at the seven colored earth Geopark to view one of the natural marvels of the world.

The seven-colored earth is a natural existence and a well-known tourist destination in Mauritius. Research shows that basaltic lava was transformed into clay minerals, which resulted in the evolution of the different colors of the sand.

All water-soluble components, such as silicon dioxide, have been actually been washed out as a result of the tropical climatic conditions.

The reddish-black iron and aluminum oxides that are left are what give the blue, and purple hues.

Study shows that it is this diverse composition that have led to the development of the distinct colors.

When you visit the seven colored earth, you will also notice a fascinating shape that is formed as the seven different colors of sand settle in various lines.

The various hue tones are supposed to be the result of the molten volcanic material cooling down at temperatures.

The term “seven colored earth” is a descriptive term rather than an official designation. Many other interpretations of this name have been reported by sources, including “Chamarel Seven Colored Earths,” “Colored Earth,” “Chamarel Colored Earths,” and Terres des Sept Couleurs in French.

Since 1960, this location has developed into one of the top tourist destinations in Mauritius. In order to safeguard the dunes and prevent guests from strolling there, there’s a wooden wall that surrounds the seven colored earth.

In conclusion, tourists who’ve been there suggest that sunrise is the best time to see the beauty of seven colored earth.