Ghanaian Rapper, Black Sheriff, Sings About His 1st Girlfriend Who Died at 17 in New Album 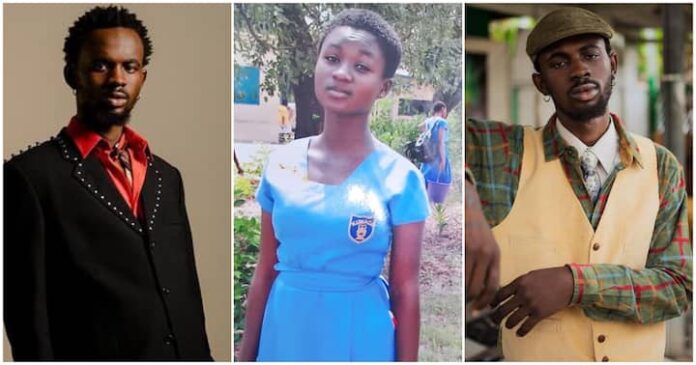 Ghanaian rapper, Black Sherif, whose full name is Mohammed Ismail Sheriff, has released his long-awaited debut album. As the album is received by fans, a particular track about his first love who passed away at a young age has since raised questions.

Titled The Villain I Never Was, the album features 14 tracks, including his hit singles Soja, Kwaku The Traveler and Second Sermon Remix with Burna Boy.

It turns out that one of the songs, Oh Paradise, was dedicated to his high school sweetheart, Clementina Konadu, who passed away in 2017.

Blacko began the song lamenting why Tina left him alone and went to his creator. He stated that he was waiting online for a message from her.

In the second verse, the rapper shared his love story and described Tina was his first love. He screamed that their relationship/ marriage couldn’t go the way they had planned it when they were young lovers.

“So this wedding couldn’t come off…at an early age when we were very young, my first love, my lover, Tina has left me 5th December. I suffered to get mine but she left me like a train,” parts of his lyric translate.

As previously revealed, Black Sherif’s girlfriend was Clementina Konadu, popularly known as Akua Thuglyf. Both were students at Kumasi Academy. Clementina passed away on December 5, 2017.

She was one of 11 students who died after the flu and meningitis ravaged Kumasi Academy.

She was buried on December 12 after a sad funeral ceremony in Krofrom, a suburb of Kumasi. She was 17 years old. Judging by the tone and lyrics of Black Sherif’s song, he doesn’t seem to have gotten over Clementina’s death.

Black Sherif was greeted like a touring president as his excited fans lined the street to see him.