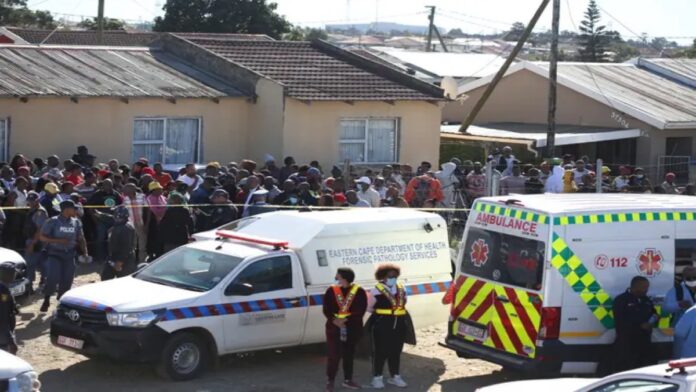 South African authorities are investigating the deaths of at least 22 young people who were found inside a popular nightclub in the city of East London.

Emergency services were rushed to the Enyobeni Taverna in the Scenery Park community on Sunday morning, where they found several bodies, with several others allegedly injured.

According to local reports, relatives have yet to be allowed to see the bodies and are calling out the names of their loved ones, hoping to hear from them.

After initial conflicting reports on the death toll, health officials confirmed they believed at least 22 people had died.

Although the cause of the tragedy is not yet known, there are reports that a toxic substance, a gas leak or possibly a stampede at the tavern may have been responsible for the deaths.

Some South African news agencies have said that the bodies were lying on chairs at the site with “no obvious signs of injury.”

The South African Police Service (SAPS) has launched an investigation into the incident and says it does not want to speculate until its investigation is complete.

“We received this report in the early hours of Sunday morning. incident are being investigated. We do not wish to speculate at this time, our investigation is ongoing,” Kinana added.

While authorities initially reported the victims were between 18 and 20 years old, News24 quoted Police Minister Bheki Cele as saying the youngest victim was just 13.

Addressing families outside the Brookwood morgue, he said people between the ages of 13 and 17 died in the Scenery Park tavern.

Cele, who reportedly cried after seeing the children’s bodies in the morgue, said: “The scene I saw inside doesn’t matter what heart you have, they say. First the sight of these sleeping bodies, but when you look at their faces, you realize that you are dealing with children. You’ve heard the story that you’re young, but when you see it, you realize it’s a disaster.”

Eastern Cape Police Commissioner Nomtheleli Lilian Mene told SABC that there was an “alleged stampede” at the tavern.

Siyanda Manana, a spokeswoman for the Eastern Cape Province Health Department, said the bodies were being transported to state morgues, where relatives are expected to help identify victims, both male and female.