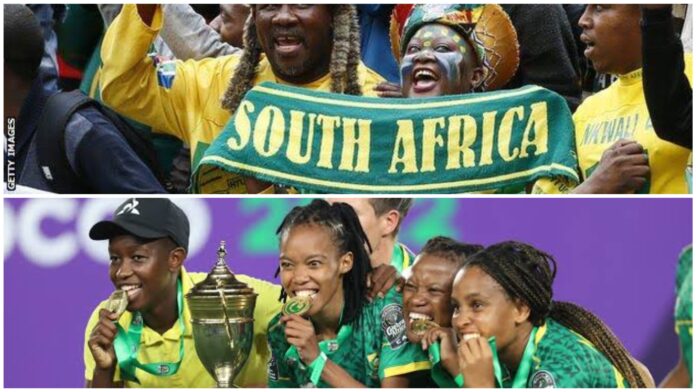 Hildah Magaia, who has proven herself over the course of the competition, scored twice in eight minutes past the hour to give South Africa their first WAFCON title.

This ended a run of five finals without a win for Banyana Banyana, who finished the tournament in Morocco with a 100 percent record and qualified for next year’s Women’s World Cup in Australia and New Zealand.

The South Africans kicked off their campaign in Morocco with a first-group victory over the Super Falcons. Thereafter, they seized the moment, winning every other game until last night’s final with the Atlas Lionesses.

Magaia took advantage of an excellent cut from Jermaine Seoposenwe, who ran into a long ball from the defense to score the first goal, while holding back the defense to deliver a specialist pass in the 63rd minute.

It ended the maddening atmosphere created by a packed crowd at the Príncipe Moulay Abdallah Stadium, where the men of South Africa had lost to Morocco in the Nations Cup qualifiers just weeks earlier.

Magaia doubled the lead in the 71st minute with another close finish, this time following a Karabo Dhlamini cross that the Moroccan defense failed to deflect.

The lack of concentration, however, caused South Africa to lose the ball and gave Morocco hope of recovery when Rosella Ayane equalized the score in the 80th minute after an assist from Fatima Tagnaout.

That meant Desiree Ellis‘ team had an anxious final 10 minutes – plus another nine minutes of referee time—before they could get their hands on the trophy.

The game started at a high pace, driven by the large crowd, who greeted every Moroccan touch with an applause and a tug of banyana with a chorus of whistles.

A muffled penalty sounded in the 11th minute, but while Tagnaout’s challenge to Magaia in his area was risky, it was masterfully timed.

Both sides pushed high to leave little room for chances, and so the first 30 minutes went by with no chance of scoring.

South Africa had a chance in the 32nd minute with a long-range free-kick that Nomvula Kgoale hit the top of the net and three minutes later Seoposenwe sent a perfect pass to Magaia, but his left-footed shot was blocked by a courageous defender. Of goalkeeper Khadija Er-Rmichi.

Magaia had another chance with a free kick five minutes before the break, but he couldn’t turn the ball properly and went wide with what looked like a good opportunity.

Morocco had their first real chance a minute later for England’s top Ayane, who tried to rip the ball from behind but failed to find the target.

The second half was a secret affair until Magaia opened the shot on goal and suddenly the opportunity saw a scorching finish.