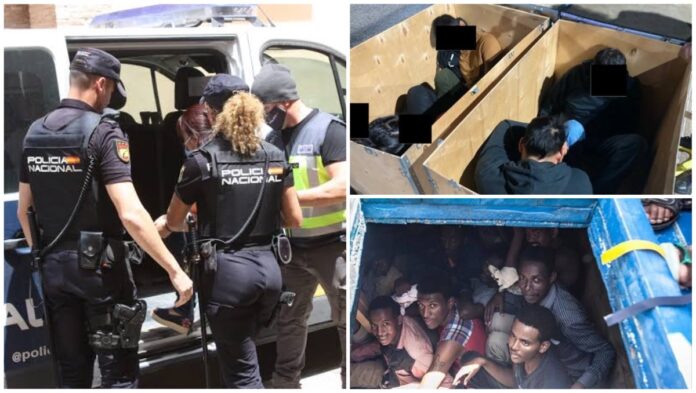 The Spanish police dismantled a criminal group in Malaga dedicated to the labor exploitation and fraudulent organization of illegal immigrants, mostly Moroccans, who were invoiced up to 3,000 euros for false contracts.

During the raid, the police arrested 43 people of different nationalities, including the leaders of the group.

As can be seen in images released by the National Police, the agents entered and searched four residences in the province of Malaga, where they seized more than 50,000 euros in cash and numerous documents.

At least seven agricultural companies are believed to have been involved in the labor exploitation scheme.
Also, read; Cape Verde to Name its National Football Stadium After Pele

These companies presented undocumented immigrants with the identities of other people organized in Spain to the administration.

Some of the migrants were housed in deplorable conditions in shelters provided by the organization. The photos show a room with rickety walls and a small single bed.

These companies also arranged fake contracts for migrants with payments ranging from 1,500 to 3,000 euros. This allowed them to become legal and pay their social security contributions.

Spain is an important gateway to Europe for illegal immigration from Africa. In 2022, more than 31,200 people entered the country illegally. However, this is 25% less than last year.