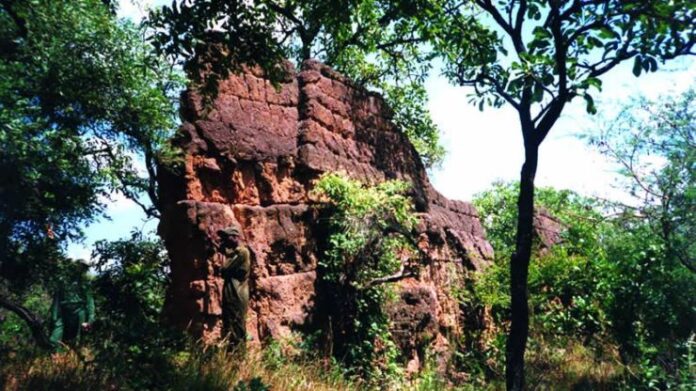 Just like The Great Wall of China, Berlin wall in Germany and Troy walls in modern Turkey, Sungbo Eredo Walls is no exceptional of a wonderful sight to behold.

Parts of what is arguably one of the most impressive monuments in sub-Saharan Africa is located in Yoruba town of Ijebu Ode in Ogun State, southwest Nigeria. It was built in 800-1000 AD in honor of the Ijebu noblewoman Oloye Bilikisu Sungbo.

The ancient structure, known as Sungbo Eredo, encircles towns and villages and was constructed around a little-known Yoruba kingdom, one of Nigeria’s three main ethnic groups.

According to a common narrative, Bilikisu Sungbo, a wealthy childless widow, used her slaves to build the walls that bear her name as a monument to herself.

Given that the Sungbo Eredo walls are about 10 km long and contain an estimated 3.5 cubic million cubic meters of shifted dirt.

Nigeria has more town walls than the rest of West Africa combined, including the old Kano walls, Sungbo Eredo walls, and the walls of Benin.

The building of Sungbo Eredo is modeled after similar defense structures found in Nigeria, such as the historic Benin Walls, the walls of Ilé-Ife, and Ilesa (called Iya in the Benin language).

With 6,500 kilometers of ramparts that once surrounded ancient Benin City and ranged in size from small trenches to enormous 20-meter-high walls, the latter was once the greatest man-made monument in the world.

The majority of these walls were hand-built without the use of modern construction tools, demonstrating the ingenuity of early African communities.

According to Oke-Eri oral tradition, the Ijebu word “Eredo” refers to a rampart or embankment.

The entire Ijebu Kingdom in South Western Nigeria was surrounded by Sungbo’s Eredo, a system of 160-meter-long rammed-earth defence walls or embankments, during the numerous inter-tribal battles in the Yoruba Kingdom.

The ruins that are still standing—mostly earthen mounds shaped like a canal cutting through a dense rain forest—serve as a reminder of a once-powerful organized society.

Legends claim that the construction of such walls was overseen by old men, young men used wooden spades to dig the ditch and fill baskets, women carried the full baskets up and emptied them to create banks on the inner side of the ditch, and kids brought the baskets back down.

The embankment is typically between three and six meters high. Many British and Nigerian archaeologists have recently been successful in mapping out and studying the walls.

The majority of studies indicate that a well-organized kingdom existed between the 10th and 14th centuries. The ruins can still be found in four locations: as one approaches Ijebu Ode, 5 miles from Epe, in the village of Eredo (the best-kept portion of the rampart), as well as 2 miles outside Shagamu to the west, 3 miles east of Ife on the Ijebu-Erimo road, and 2 miles north of Oru on the Ibadan Road.

It might surprise you to know that very few Nigerians have ever heard of Sungbo Erdeo, and even fewer have dare to go there.

Many of the old artifacts have been completely neglected by both the local population and the government, lying in ruins or hidden by a dense, nearly impenetrable jungle environment.

The research of an earlier archaeologist, however, caught the interest and curiosity of Patrick Darling, an archaeologist at the Bournemouth University of Britain.

Over the past few years, a combined team of Nigerian and British archaeologists and nature preservationists have succeeded in mapping the structure.

Nigeria is regarded as a treasure trove of archaeological findings due to the fact that several ethnic groups and peoples have lived in the area throughout the years, as well as the fact that less archaeological work has been done there in comparison to other countries in the region.

Eredo, Nigeria’s commercial center, is situated in the northeast of Lagos and spans an area of about 25 miles from south to north and 22 miles from west to east.

According to local reports, Sungbo, a wealthy but childless widow, erected the enormous monument Eredo in order to leave a lasting legacy.

In September 1999, Dr. Patrick Darling, a British archaeologist working at Bournemouth University at the time, surveyed the site and started making public his efforts to preserve the Eredo and give the site some prominence.

Sungbo Eredo impressive size and intricate construction attracted attention from the entire world’s media. The Eredo has hitherto received little attention outside of the circle of Yoruba history experts and locals.

In 2017, technologist Olufeko oversaw a contract team working inside the rampart that brought the area and its story back into public discourse.

According to a study, the enormous structure, which was most likely constructed over the course of 300 years, served more as a spiritual fortress than a physical one.

The locals built shrines at its base and deposited gifts and food there as a form of protection against invaders.

Within the vicinity of the monument, women still gather to pray at the foot of the building in the hope that doing so may facilitate childbearing, which is also an ancient custom that has persisted to this day.

Another explanation for this custom is that they truly went to pray to Sungbo, asking him to spare their children from the nether realm and allow them to live.

Some historians have asserted that Bilikisu Sungbo and the biblical and Islamic Queen Sheba (also known as Makeba, which is Bilikisu in Arabic) are the same person.

They contend that Sungbo left Eredo for Ethiopia before traveling to Jerusalem to meet King Solomon in order to confront him with the most challenging questions and spices ever brought to Jerusalem.

She became one of King Solomon’s wives as a result of his admiration. However, this story cannot be disproved or ignored because she was identified as a woman with black skin in the sacred texts.

The tomb of Queen Sungbo Bilikisu, which is now a pilgrimage site for some religious worshipers (both Muslims and Christians) and locals, is located about 10 kilometres from the rampart found in Eredo village. Dogs and women are not permitted inside the tomb.