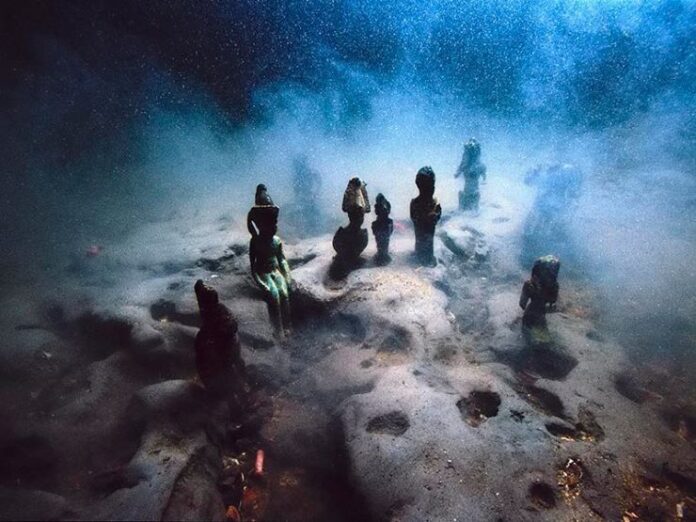 After more than 2,000 years, the Lost City of Heracleion, which once served as Egypt’s principal harbor, was uncovered underwater in the year 2000. It has many ties to Ancient Greece and its mythological origins date back to the 12th century BC.

Archaeologists claim that the city, which had flourished as far back as the final days of the Pharaohs, was eventually destroyed due to earthquakes, tsunamis, and rising sea levels over time.

The massive structures of Heracleion fell into the water at the end of the second century BC, most likely following a severe flood. During the Roman and early Arab eras, some of its residents remained in what was left of the city, but by the seventh century AD, the majority of Heracleion had submerged beneath the Mediterranean.

Many of its immeasurable treasures have since been exhumed from the murky depths to which they were sent and shown all over the world, giving us a look into the world of the Ancient Greeks and Egyptians.

Thonis, also known as Thonis-Heracleion was the ancient Egyptian port city of Heracleion, which was situated on the Mediterranean Sea 32 kilometers (20 miles) northeast of Alexandria.

Its remnants are situated in Abu Qir Bay, just ten meters (thirty feet) of water, 2.5 kilometers off the coast. According to a stele discovered there, it was one city that went by both its Greek and Egyptian designations.

Heracleion experienced its heydays as the major port of entry into Egypt for the numerous ships arriving from all across the Greek world, long before Alexandria was even a glint in Alexander the Great’s eye.

Thonis was initially constructed on a pair of nearby islands in the Nile Delta. Canals with numerous distinct bays and anchorages cut through it. Ferries, bridges, and pontoons connected its wharves, incredible temples, and tower homes.

In the Late Period of ancient Egypt, the city served as the nation’s primary port for foreign trade and the collection of taxes. It was an emporion, or commercial port.

Khonsou, the son of Amun, was known to the Greeks as Herakles or Hercules, and Thonis had a huge temple dedicated to him. Amun’s worship gained popularity over time.

A massive temple to Amun-Gereb, the reigning god of Egypt at the period, was built in the centre of the city when it was at its height during the 6th and 4th century BC.

Franck Goddio and his team, working with the Egyptian Supreme Council of Antiquities, were able to locate, map, and excavate portions of the city of Thonis-Heracleion, which is located 6.5 kilometers off the present-day coastline.

They did this by using a special survey-based approach that makes use of the most cutting-edge technical equipment. The enormous temple of Amun and his son Khonsou are just a few of the historical sites that Franck Goddio has discovered.

A rough estimate of 64 ships, 700 anchors, a hoard of gold coins, 16-foot statues, and most notably the remains of a sizable temple to the god Amun-Gereb and the tiny sarcophagi for the animals that were brought there as offerings were among the underwater ruins.

The statues of the god Serapis and the queen Arsione II were also among the many antique artifacts from the city’s past that were discovered.

Discovering this, Frank resolved a historical mystery that had baffled Egyptologists over many years.

Every year, during the Khoiak month, the city served as the location for the “Mysteries of Osiris” ceremony. During these rituals, a statue of the deity was moved from the Amun temple to his shrine in Canopus in his ceremonial boat.

Heracleion was replaced as Egypt’s main port by Alexandria, constructed by Alexander the Great, in the second century BC, right as the city was plagued by a series of catastrophes.

The amazing discoveries Goddio made during the expedition are explained in detail on his extensive website.

Goddio’s website also states that the “objects recovered from the excavations illustrate the cities’ beauty and glory, the magnificence of their grand temples, and the abundance of historic evidence: colossal statues, inscriptions and architectural elements, jewelry and coins, ritual objects and ceramics—a civilization frozen in time.”

A portion of the temple dedicated to Amun/Herakles, a gigantic red granite statue of the fertility deity Hapi, and a bronze figure of the ruler/god Osiris are among the valuable artifacts Goddio is in charge of unearthing and displaying to the modern world.

All the artifacts are now housed in Grand Egyptian Museum, Cairo.

Thonis-underwater Heracleion’s archaeological dig is still running strong today. According to Franck Goddio, barely 5% of the city has been fully explored.

Franck Goddio devotes all of his time to studying underwater archaeology and disseminating the information learned via these discoveries through the writing of books and articles, as well as the planning of exhibitions.