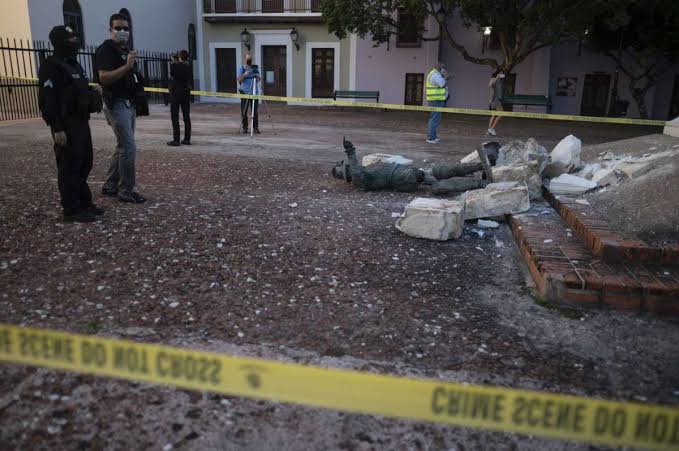 A statue of the Spanish explorer Juan Ponce de León who is regarded as murderous, was demolished early Monday morning by unknown people in San Juan, Puerto Rico; just hours before a visit from the Spanish king the Associated Press reported.

The statue, which stands in San Juan’s Plaza San José, was found broken on the ground around 4:30 a.m.

Officers were patrolling the historic district at the time, and police commissioner Colonel José Juan García told the Associated Press that the officers heard a loud noise. “It sounded like an explosion,” he said.

The alleged vandalism took place mere hours before the King of Spain, Felipe VI, was to make a visit to San Juan to meet with Puerto Rico Governor Pedro Pierluisi  as they celebrate the 500th anniversary of the founding of the city.

Police told the Associated Press that they have seen other statues defaced with graffiti, but this was the first they’d seen one toppled to the ground.

There have been protests in Puerto Rico against the symbols of Spain’s legacy on the island in the past, as two years ago; activists marched through San Juan in order to protest the symbols of oppression that are scattered across the historic district; wishing to erase the images of Spain’s hold on the U.S. territory.

“These statues represent all that history of violence, of invasion, of looting, of theft, of murder,”; an activist by the name of Pluma, told the Washington Post in 2020. “These are crimes against humanity.”

In the year 1493, Christopher Columbus and Juan Ponce de León landed in Puerto Rico, and Ponce de León became the first governor of the island.

The move into power caused an uproar by the native Tainos; a subgroup of the Arawak Indians.

Puerto Rico was under Spanish rule until the year 1898; when it was transferred to the United States after the Spanish-American war.

In June of 2020, a statue of Ponce de León in Florida was vandalized. According to the Orlando Sentinel, the words “Ais murder” were spray-painted on the statue’s pedestal; and red paint was splattered across the body depicting the explorer.