The Story Of Jacob Morenga, The Namibian Fighter Who Frustrated the Germans During the German-Herero Conflict 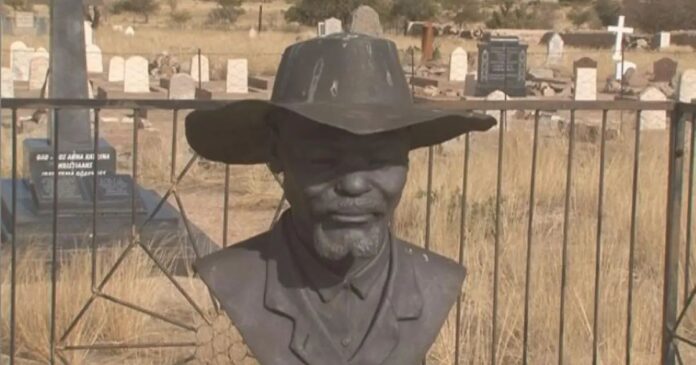 One of the key figures in the revolt against the German Empire that took place between 1904 and 1908 was Jacob Morenga, who was also known as the “black Napoleon.”

It was under Jacob Morenga leadership that the Herero and Namaqua tribes, which were known enemies, formed an alliance.

Morenga, who was raised by missionaries and worked as a mineworker in South Africa, was born in 1875 to a Herero mother and a Nama father.

With only about 11 followers and limited weapons, Morenga was forced to use improvised methods to defeat one of the most powerful military forces in the world at the time.

His reputation increased with each successful raid drawing a crowd of supporters. Adding to his increasing fame, he pulled off several antics which led to the growth of about 300 soldiers under his leadership.

He frequently carried out assaults on German farms and territories, living almost entirely off the supplies of this people.

Early in the 1900s, Morenga played a major role in the fight against German colonial control in Namibia, what was then known as South West Africa.

However, it was up until 1903 that Jacob Morenga started to gain notoriety among his people and his rivals.

The German-Herero conflict of 1904–1908 was a conflict between the Herero people and German colonial troops in German South West Africa which resulted in the death of about 75% of the Herero population, and is generally regarded as genocide by academics.

With Lüderitz’s help, Germany’s influence gradually spread throughout the South-West African region, and by 1885, all but one of its tribes, the Witboois, had made some sort of agreement with Germany.

Missionaries, traders, and other Europeans began to arrive the country after Germany made its claim to south-west Africa, and by 1903 there were over 4000 European residents there, most of them being Germans.

The influx of German and European immigrants into the region also resulted in changes in how the indigenous Herero and Nama peoples were treated.

The natives were faced with increased legal discrimination, cattle theft, looting, murders, rapes of their women, and expropriation of land for the use of European settlers.

The Hereros developed a deep hostility toward German settlers as a result of their constant atrocities, and this made the Hereros revolted against the Germans, which eventually resulted in the death of about 150 German settlers.

The fight was also led by Samuel Maharero, who was the paramount ruler at the time when the conflict started.

No one knows which group shot the first shot, however, it didn’t take long before the Herero fighters could take control of the German’s territory.

Fighting spread across the central high grounds for weeks. Maharero announced clear rules of engagement that forbade violence against women and children in an effort to gain control of the situation.

Nevertheless, 123 settlers and soldiers at least four of them were women were murdered in these assaults.

The German response was under the direction of Major Theodor Leutwein, the colony’s military administrator.

He was in favor of a peaceful resolution because the Herero were well-armed and furthermore far outnumbered the German colonial troops.

However, he was overruled by the General Staff in Berlin, who insisted on a military response. The governor was deprived of his military leadership as a result of Leutwein’s men being driven into a humiliating retreat on April 13.

Lieutenant General Lothar von Trotha was named the new commander in chief in his place by German Emperor William II.

He served as a colonial warrior in both the Boxer Rebellion in China and the conflicts in German East Africa.

On June 11th, 1904, Von Trotha arrived. There had not been a significant battle for two months at that point.

In an effort to avoid more fights and safely await a potential peace negotiation, or, if at all, be well-positioned to flee into British Bechuanaland, the Herero had gone to the isolated Waterberg plateau at the edge of the Kalahari desert (now Botswana).

This break allowed Von Trotha to slowly encircle the Herero. Given the incompleteness of the German maps for the region and the difficulty of transporting heavy weapons and water across the challenging terrain, moving his forces to the Waterberg plateau was a significant undertaking.

Von Trotha gave the command to strike at first light on August 11, 1904. The Germans used their advanced weapons in addition to the element of surprise as they faced an estimated 40,000 Herero, of whom only around 5,000 had weapons.

The plan was effective. Herero soldiers also fought back but didn’t win the battle. However, the majority of the Herero people managed to flee in despair into the Kalahari.

German troops were sent to control the situation, but they only succeeded in scattering the rival group who then turned to violence, carrying out attacks on German settlements preventing them from gaining an advantage with their advanced weapons.

Together with Samuel Maharero, Jacob Morenga took part in these smaller, more regional uprisings that were occurring throughout German South West Africa.

Through this, Morenga garnered the most of his fame while demonstrating his tactical prowess.

Jacob Morenga received his own forces made up of Hereros and Namaquans to fight in the 1904–1907 Herero and Namaqua War, which resulted in the first genocide of the 20th century.

Marenga was skillful at utilizing the unique fighting principles of the Herero and Namaqua. The Namaqua adopted more guerrilla-style tactics, but the Herero preferred direct and open fighting with German forces.

The colonial soldiers dreaded Marengo so much because of his power and persistent opposition to the German occupation that Kaiser Wilhelm II personally placed a 20 000 Mark bounty on his head.

From the underground hideout of Khauxanas in southern Namibia, the gang led by Morenga planned and executed their attacks on the Germans.

As a result of Morenga’s reputation as a military genius and an honorable adversary inside the Schutztruppe and the Imperial German Army, the nickname “del schwarze Napoleon” was given to him (the Black Napoleon).

Otto Bismarck assigned Captain Paul von Lettow-Vorbeck the job of capturing Jacob Morenga, dead or alive, after Morenga’s raids became a little too much for the Germans to handle.

Captain von Lettow-Vorbeck was wounded in the chest and left eye which was rendered blind afterwards during a gunfight with Morenga and his troops in 1906.

It was quite bad that he was flown to South Africa for medical care and rehabilitation.

The death of Jacob Morenga

Morenga was apprehended and imprisoned by South African police following more than 50 assaults on German troops.

Shortly after, he was nonetheless freed on the condition that he should never visit German South West Africa.

Despite this, he once more crossed the Orange River into German South West Africa, where he led a group of locals in combat with the Germans.

Following the Battle of Rooysvlei in May 1906, Morenga was once more compelled to escape to South Africa from German South West Africa.

He withdrew into the Kalahari desert, where he prepared to launch other battles against German soldiers.

However, this didn’t go as planned as Morenga’s life came to an end on September 20, 1907, in Eenzaamheid.

He was shot and killed in a fight between his forces and the combined German and South African forces.

Jacob Morenga is one of Namibia’s nine national heroes today, and the country honors him with a granite headstone bearing both his name and a portrait.

In the far South of Namibia, a statue of Morenga is also located in the Warmbad cemetery. One of the rare artifacts left from the local resistance battle against German colonialism is the sculpture.

Morenga’s capacity to overcome ethnic and tribal barriers placed him apart from every other tribal leader during this time.

Due to longstanding resentments from previous tribal battles and the loss of his sons during the Battle of Osona, even the great Hendrik Witbooi occasionally found it difficult to fight alongside the Herero people.

These obstacles did not stop Morenga, however, as he was able to bring the Namaqua, Witboois, and Herero together and combine their skills to become a formidable army.

Many strong men still suffer with the same issues that Morenga did when it came to overcoming challenges related to ethnicity.

And what makes his accomplishments even more impressive is that he did this during the worst possible circumstances, when persecution was a regular occurrence.

Marenga was referred to as “the man of the future” because he had a vision of a wide African nationalism that transcended local ethnic allegiances.

With the multi-ethnic soldiers under his leadership, he used scientific guerilla tactics to combat the German colonial army in more than fifty battles.