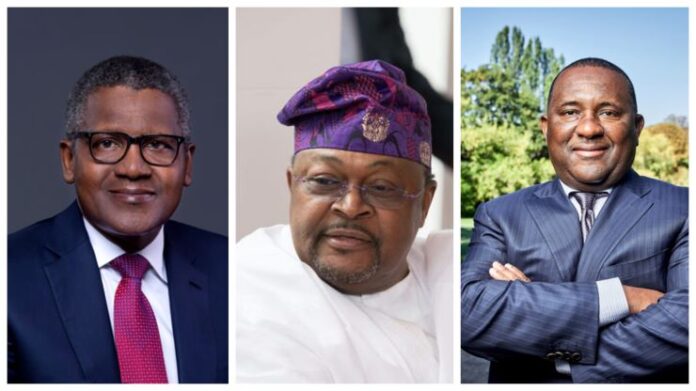 The 10 richest men in Africa amassed their wealth through investments in sectors like retail, energy, and the diamond industry.

Aliko Dangote, the owner of the biggest conglomerate in West Africa, is at the top of the list with a net worth of $17.8 billion, giving them a total combined net worth of $76.5 billion.

Patrice Motsepe, one of the wealthiest persons in South Africa with a net worth of $3 billion, is among the other famous names on the list of the richest men in Africa too.

In 2008, after being recognized as a billionaire, Patrice became the first Black African to be included in Forbes.

Aliko Dangote, who ranks number 1 on this list had an excellent start to 2022 by increasing his wealth by roughly $950 million.

In 2019, it earned 891.7 billion Naira ($2.5 billion). Additionally, the billionaire also has interests in packaged foods, sugar, salt, oil, and fertilizer.

Related article: 5 Habits of African Billionaires You Should Know About

One of the most well-known millionaires in South Africa, Rupert owns shares in numerous local and foreign businesses.

Topping second on the list of the richest men in Africa, Rupert has assets in the media, sports, consumer goods, healthcare, industrial, and infrastructure sectors through Remgro.

Through a family trust, he also has influence over Cie Financiere Richemont, the largest manufacturer of luxury watches in the world.

The corporation is situated in Bellevue, Switzerland, and its brands include Cartier and Jaeger-LeCoultre.

With a net worth of $8.30 billion, Nicky Oppenheimer is not only the number three on the list of the richest men in Africa but he is also the second-richest individual in South Africa.

Thanks to the revaluation of his private equity assets held through Stockdale Street and Tana Africa Capital, his net worth has climbed by almost $200 million since the start of the year.

Due to an increase in the value of his most valuable asset, Jetro Holdings, Kirsh’s net worth has dramatically increased over the past years.

His 75% ownership of the New York-based conglomerate Jetro Holdings, which is currently valued at $4.8 billion on the open market, is said to account for 61% of his overall wealth, according to Billionaires Africa.

Nassef made records early this year for one of the quickest streaks of wealth-building among his peers, acquiring $260 million as a result of an increase in the market value of his Adidas stock.

The shares of the German-based sportswear company Addidas dropped by more than 6% as a result of the recent sell-off on the global equity market, which was brought on by worries about the monetary authorities’ policy stance in containing rising consumer prices and inflation.
Nassef Sawiris remains Egypt’s richest individual and the fifth richest man in Africa according to his $6.5 billion net worth.

He is currently about $14 billion behind Aliko Dangote, the richest person in Africa, whose net worth ($20.1 billion) has increased since the beginning of the year.

Mike Adenuga follows closely behind Nassef on the list of the richest men in Africa.

The second-largest telecommunications provider in Africa, Globacom, is led by the Nigerian billionaire who also has stock in Conoil, an oil company.

Sawiris owns interests in numerous gold mines all throughout the world, as reported by Bloomberg.

When he sold his shares in the telecom business Vimpelcom in 2011, he earned more than $4 billion.

He is Nassef Sawiris’ brother and he has a net worth of about $6.4 billion.

The Nigerian company BUA Group, most known for making cement and sugar as well as controlling real estate, was founded by Rabiu, the son of Isyaku Rabiu, one of Africa’s most notable industrialists.

With a net worth of $6.3 billion, Abdulsamad Rabiu is known as one of the richest men in Africa.

Cevital, the biggest privately-owned conglomerate in Algeria, was founded by Rebrab. In addition to operating one of the biggest sugar refineries in the world, Cevital controls various brands.

The corporation also owns a steel mill, a water purification business, and a home appliance company.

With a net worth of $5.1 billion, Issad Rebrab ranks ninth on the list of the richest men in Africa.

Motsepe became the first Black African to be listed on Forbes’ billionaire list in 2008 and he currently has a net worth of $2.7 billion making him the tenth richest man in Africa.

African Rainbow Resources, which invests in minerals like platinum, copper, and coal, was founded by Patrice.