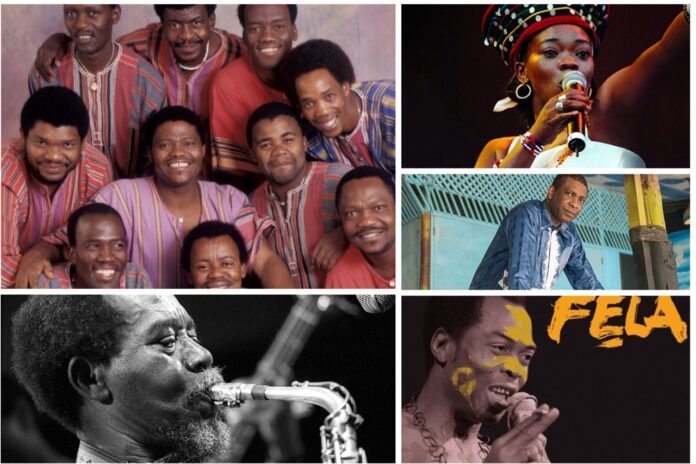 African music is a force that has equally evolved with time. It’s quite obvious that a number of African music legends have been able to leave either a mark, an emotion, or an influence that has lasted for ages (and still counting).

African music crosses all boundaries and makes people from all around the world want to explore the origin of the unique sound and culture.

Many African musicians have made significant contributions to the continent’s music business, making them musical giants that will never be forgotten.

These legends are extraordinarily gifted, well-known, powerful, and have left their impact on the globe.

These individuals have contributed significantly to ensuring that Africa can be proud of having its own native sounds.

For this purpose, we’ve compiled a list of the top ten African Music Legends to know about.

You know we just had to start the list of the top ten African music legends with Fela Kuti. Due to all that he accomplished for African music throughout his lifetime, Fela, who is most recognized for helping to establish Afrobeat, has also earned the title of legend.

He was born in Nigeria in October 1938. After completing his music studies in London, he immediately came home with his own Afrobeat group, Africa 70.

Fela publicly criticised the military government in Nigeria at the time by using his voice. As you can expect, this led to a disagreement between him and the government that lasted for a long time.

Fela Kuti is regarded as the finest African performer to have ever lived and is known for his explosive performances.

He was a multi-instrumentalist, musician, composer, political activist, and the father of the Afrobeat musical style.

He was well-known for his songs in Yoruba, his home language, and Pidgin English, which were enjoyed by people all over Africa.

If Miriam Makeba is unfamiliar to you, you ought to be familiar with Mama Africa. In terms of the continent, Miriam Makeba, a South African, known as “Mama Africa” can never be forgotten.

Miriam Makeba discovered her voice as a choir member, she had an amazing stage presence and an angelic voice.

Miriam lent her voice to the continuing battle against apartheid at the time, much like the majority of South African music luminaries did.

She established her reputation by the late 1950s, and in 1959 she had an appearance in the documentary Come Back Africa.

She has a Grammy award and is renowned throughout the world for her distinctive sound and live performances, hence her inclusion as one of the top African music legends to have lived.

Angelique Kidjo is a Yoruba-born celebrity who first rose to fame as a movie star in 1960. It wasn’t difficult for her to develop her voice as she was raised in a family of performers.

She quickly achieved full-time status as a musician because of her lovely voice. She sang in English, Yoruba, and French as her fan base grew, capturing both domestic and international audiences.

She is not only a singer and songwriter or one of the most popular African music legends, she is also an activist that lends her voice to the voiceless. She could thrill her followers and supporters because of her versatility.

With numerous more honors to her name, Angelique is a five-time Grammy Award-winning musician.

She is regarded as one of the greatest musicians from Africa whom the world will never forget because in addition to having a tremendous voice, she supported women’s and children’s rights to quality education and healthcare.

Lucky Dube was a reggae musician from Johannesburg, South Africa. He is recognized as the founder of African reggae music.

He began playing music at an early age and, when he was 18 years old, he joined his cousin’s band. Later, they changed the group’s name to “Lucky Dube & The Supersoul” and created their debut album.

Later, Supersoul was eliminated from the moniker, and Lucky Dube went on to create a number of successful records and travel the globe.

Lucky wrote a number of songs that were well-received by people from all over Africa. Despite the fact that he is late, he remains one of the continent’s greatest musicians.

A well-known Juju musician from Nigeria, he is a legend of African music. He comes from a royal family in Ondo State (in the country’s southwest), and he is known for traveling around the world with his band to sing and perform.

As a result, he has amassed a large number of fans and supporters, and he remains one of the best to have emerged from the continent.

King Sunny Ade is also a businessman. He used the proceeds from his early albums to launch a number of businesses, including an oil company, a mining company, a public relations firm, and a variety of others.

In the mid-1990s, the renowned King Sunny Ade Foundation, a home for young performing artists from across the country, was also established.

He is a man for the people, and he made certain that he paved the way for many others to find their voice, just as he did.

Known as the Queen of African Pop and from South Africa, she made a name for herself as one of Africa’s greatest musicians of all time.

Brenda Fassie was a fantastic pop singer whose story continues to inspire aspiring musicians. She was born in Langa, Cape Town, and at the age of 18, she moved to Soweto, Johannesburg, to pursue her dreams of becoming a star.

Brenda rose to prominence as the lead singer of the popular township pop band Brenda & The Big Dudes. This catapulted her to stardom, and by 1996, her songs were at the top of the charts, with each of her albums becoming multi-platinum sellers in South Africa.

Brenda was known as The Black Madonna due to her fearlessness. Her music dealt with a wide range of subjects. From love songs to songs calling for the release of Nelson Mandela, South Africa’s Black President.

Ali Farka Toure is Mali’s pride, and he is still one of the best talents the country has produced. He is recognized as one of the top African music legends because he is extremely talented in the field of music.

His musical achievements have yet to be fully replicated in Mali. He can also perform songs in ten Mali languages.

Toure founded the record label “World Circuit” before he passed away and was the recipient of two Grammy awards.

Born in Dakar, the capital of Senegal, Youssou N dour is a native of the nation. Youssou is a gifted singer and songwriter who has amassed a large following across the African continent because of his incredible musical talents.

He is one of the founders of the well-liked musical genre known as Mbalax in Wolof. He is held in very high esteem on a global scale as a well-known performer, lyricist, and composer.

His blending of Mbalex with elements of Latin, Cuban, Hip-hop, and pop has made him popular around the world. From 2012 to 2013, he was Senegal’s minister of tourism.

The multi-instrumentalist Ghanaian artist Emmanuel Tettey Mensah, better known by his stage name E.T Mensah, is regarded as the “King of Highlife” music.

In the 1950s, his band, “The Tempos,” was the talk of Ghana’s nightlife and went on extensive tours throughout West Africa.

He began by playing in a primary school band and quickly realised how much he enjoyed making music.

E. T Mensah recorded the iconic song “Ghana Freedom Highlife” in 1957 to commemorate Ghana’s independence. On several occasions, they had the honor of playing for Ghana’s president, Kwame Nkrumah.

Concluding the list of the most popular African music legends to have ever lived is the Lady Black Mambazo.

The Ladysmith Black Mambazo is a renowned South African music group, known for their exceptional talent and Grammy Award-winning performances.

With a large fan base across Africa, they have become known for their unique isicathamiya and mbube styles, and have worked to establish Africa’s own musical sound. Their rise to fame came after their collaboration with Paul Simon on his album, Graceland.

They have also become ambassadors of their country, using their success to promote South Africa’s culture and traditions to the world.

They are dedicated to not only showcasing their vocal abilities but also sharing the beauty of their homeland with others.

The finest African musicians of all time made significant contributions to both the African music scene and themselves.

They have established a reputation for themselves and received numerous honors for their achievements. Even though there are aspiring musicians succeeding today, we are aware that they will have to put in even more effort to catch up to these performers.