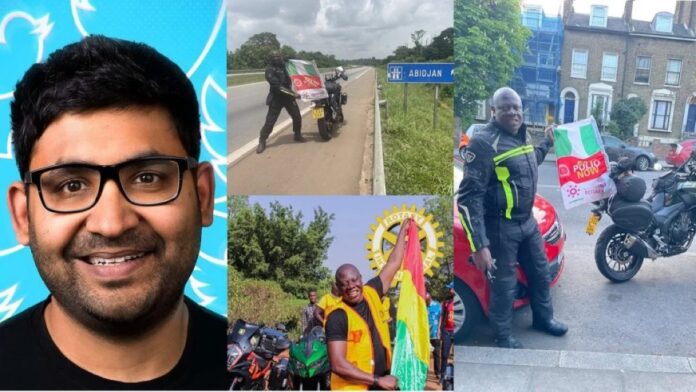 Twitter CEO, Parag Agrawal, has commended the efforts of Kunle Adeyanju, a Nigerian man whose journey from London to Lagos has since gone viral on social media.

While dozens of people have responded to the “charity journey” undertaken by Adeyanju, Agrawal seemed to have also taken a shine to the Nigerian especially as his adventure from London to Lagos with a motorcycle is to campaign against polio.

Kunle’s adventures began on Tuesday, April 19, when he left London to journey into Africa. The Nigerian kept the world updated on his journey as he often posted pictures of himself arriving in different nations and cities in Africa.

Adeyanju particularly made Twitter his “updating platform,” where he added pictures and interesting captions about his location and destination.

As of the time of writing this, Adeyanju is currently in Ghana, where he has also updated his status by posting pictures on Twitter.

Over the course of his journey, he has garnered at least 80 thousand followers on Twitter, a commendable process that allowed thousands to keep up with his journey as he shared posts about his encounter.

On his arrival to Ghana, Kunle Adeyanju quickly visited the Twitter office in the country, where he was welcomed by the Twitter team who had seemingly been keeping up with his updates on the platform. Several pictures of Adeyanju at the office surfaced online with Adeyanju posing with the Twitter team.

The Twitter team shared his picture and wrote; “Since 19th April, @lionheart1759 has been riding from #LondontoLagos on a campaign to end Polio. He’s shared daily updates of his journey on Twitter. Myself, @OluwamayowaTJ & @nnekachile of #TwitterGhana office had the privilege to meet him on his arrival in GH. #TwitterForGood.”

While the tweet by the Twitter team in Ghana trended online, with thousands of likes and retweets, it caught the eye of the Twitter CEO, Parag Agrawal. Agrawal didn’t waste any time appreciating Kunle Adeyanju for his commitment and inspiring action.

“Hey @lionheart1759 — thanks for sharing your inspiring journey with the world on Twitter, and with our @TwitterGhana team. Love to see it #LondonToLagos”, Agrawal tweeted.

Recall that just as he documented his positive encounters, he also used Twitter to share the issues he faced on his journey. Earlier on, Adeyanju spoke about his troubles in Mauritania.

According to him, Mauritania’s police, immigration, and customs departments collaborated as a cartel to extort money and make life difficult for outsiders.

He went on to explain that he has traveled to over 75 nations and can clearly state that Mauritania is the worst of them all.

According to him, his path has been both smooth and bumpy thus far. While his experiences in Mauritania were worth noting, he also experienced difficulties in other parts of the continent during his travels.

For instance, in Mali, he faced a significant difficulty when his rear wheel was destroyed. However, that has now been resolved, and he has moved on.

Kunle’s statement of his plans to sell his Eagle bike and donate the earnings to charity has gotten a lot of attention on Twitter, as well as support from the internet community.