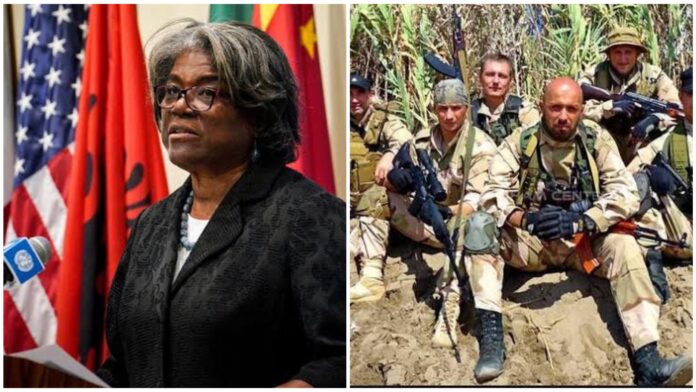 US Ambassador to the United Nations Linda Thomas-Greenfield said Wagner Group mercenaries exploited natural resources and “these ill-gotten gains are being used to fund Moscow’s war machine in Africa, the Middle East and Ukraine.”

“Make no mistake: people across Africa are paying a heavy price for the Wagner Group’s exploitative and human rights abuse practices,” Thomas-Greenfield told a UN Security Council meeting on funding of armed groups through the illicit trade in natural resources in Africa.

Formed by veterans of the Russian armed forces, Wagner fought in Libya, Syria, the Central African Republic, Mali and other countries.

It was formed in 2014 after Moscow annexed Ukraine’s Crimean Peninsula and began supporting pro-Russian separatists in Ukraine’s eastern Donbass region.

Russia has aggressively pursued its strategic goals in Africa in recent years – securing a foothold in the eastern Mediterranean, accessing naval ports on the Red Sea, expanding opportunities for natural resource extraction, driving out Western influence and promoting alternatives to democracy as a territory and regional standard.

Africa is therefore more of a “theatre” for Moscow’s geostrategic interests than a goal in itself – a perspective that is reflected in the means employed by Putin’s administration. Unlike most major external partners, Russia does not invest significantly in conventional policy in Africa – for example, B. Economic investment, trade and security assistance.

Instead, the European country relies on a variety of asymmetrical (and often extralegal) means of influence – mercenaries, arms deals, opaque contracts, election interference and disinformation.