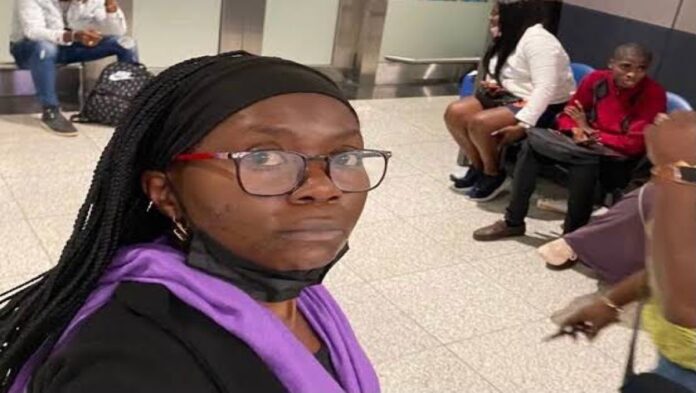 UAE authorities sentenced Dinchi Lar, a Nigerian national, to one year in prison for tweeting a video that exposed the terrible treatment she and other Africans suffered at Dubai International Airport.

On August 31, Lar tweeted a now-deleted image and video recounting the foreign government’s mistreatment of Africans.

The Nigerian claimed she was detained for eight hours without any explanation and reprimanded the Dubai government for mistreating her and other African citizens without apology, even after the results showed she had fulfilled all visa requirements and was not carrying any contraband.

“I am at Dubai International Airport and myself and some Nigerian with valid visas are detained for a quarter hour after arrival with no explanation and no information on what we can do. Please help me. We are more than 20″, tweeted the Nigerian.

“The treatment of Nigerians in Dubai is wrong. Once you meet the requirements for a cash-intensive visa and receive one, you will be treated with contempt on arrival. They don’t get an explanation or they can ask a question if they decide to do what they want,” Lar added.

Under Dubai’s then-new visa regulations, the Nigerian woman applied for a family visa and was traveling with her sister, who was also detained at the airport with other Africans.

Later, Lar was allowed into the city, but on September 6, while trying to leave Dubai for Nigeria, supposed vengeful foreign officials attacked and arrested her for the viral tweet that cast a negative light on the country.

The video tweet, which specifically showed the harsh treatment of Nigerian citizens by Dubai authorities, was deleted, believed to have been ordered by foreign authorities in the days following Lar’s arrest.

Despite the deletion of the video, the UAE government sentenced the Nigerian woman to one year in prison on October 12 without giving her a fair trial or legal representation, according to Jerry Doubles, who is familiar with the matter.