Uganda Discovers Rare Minerals Worth $1 trillion, One Month After Discovering Gold worth $12.8 trillion 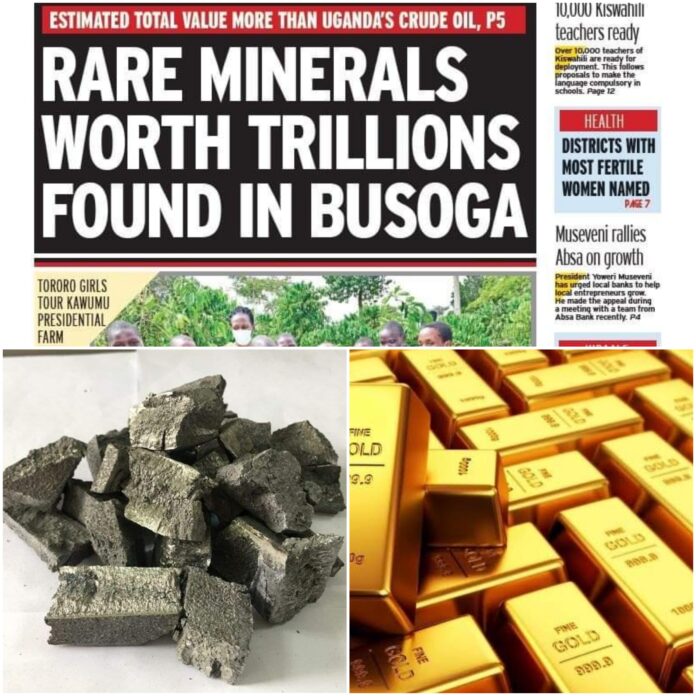 Uganda has discovered $1 trillion worth of rare minerals, a month after discovering 31 million tonnes of gold deposits worth $12.8 trillion.

These rare earth minerals discovered at the Busoga area of Uganda, include dysprosium cerium, erbium, europlum, gadolinium, holmium, and lanthanum.

According to the Minister of State for Energy, Mr. Sidronius Opolot, the discovered deposits are among the largest in the world.

Southern China is currently the largest producer of some of the said minerals with Uganda expected to reach a viable spot on the list of producers soon.

According to local reports, the minerals are said to be worth more than the country’s return from Crude oil, a billion-dollar revenue maker for the East African nation.

Recall that Uganda earlier announced that it discovered 31 million tonnes of gold waiting to be mined in the country after several surveys were carried out.

A spokesman for Uganda’s Ministry of Energy and Mineral Development, Solomon Muyita, said that these reports are aimed at attracting gold miners and investors in the cryptocurrency sector.

The company began construction of its $200 million multi-phase gold refinery in the district in 2016. Muyita said the discovered gold can be mined immediately.

Refining gold locally can encourage job creation and improve the delivery of social services to those who live close to where the mineral is mined.

Ugandan President Yoweri Museveni has called for the raw material to be refined locally and has labeled any foreign refinery a criminal. “It’s criminal to argue for continuing to export raw materials to Africa when the product is worth 90% more than what you give to outsiders,” he said.

He explained that due to the lack of the two permits, they were behind schedule with the construction. The Company recently received a gold production license in March of this year and has a 21-year contract to mine gold onshore. and expect to double their rate as they anticipate the start of gold production in July 2023.

The company invested US$ 200 million to build a refinery. Despite all the gold discoveries in the country, the mining difficulty is remarkably high, which affects the amount of gold actually mined. About 2,500 to 3,000 tons are mined annually.