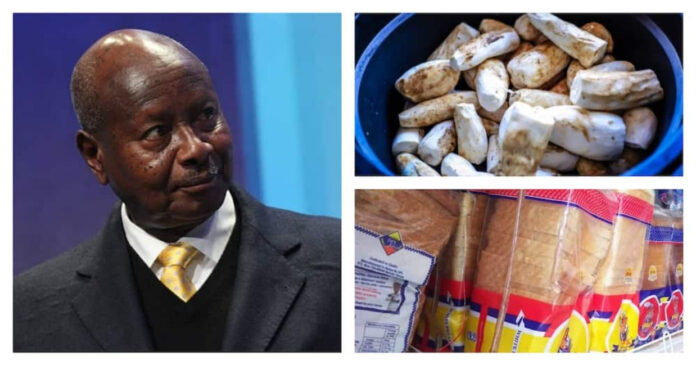 President Yoweri Museveni of Uganda has advised his citizens to encourage the consumption of cassava in place of wheat. Though Museveni’s statement was due to the hike in the price of wheat, he sees it as an opportunity to encourage the consumption of locally made resources. The fluctuation in economic standards within the country has since been blamed for the increase in the price of several commodities, including wheat, an ingredient in reading production.

While speaking to senior government officials on Sunday, President Yoweri Museveni dimmed the hopes of many Ugandans who were counting on his government to implement short-term interventions to protect them from the skyrocketing prices of essential commodities.

According to Museveni, the skyrocketing prices are the result of unprecedented circumstances such as COVID-19, which have disrupted the global supply chain and created a scarcity of commodities, exacerbated by man-made external factors such as Russia’s invasion of Ukraine.

In his address, Museveni noted that “The issue of skyrocketing commodity prices like petrol, and fertilizers, among other essential commodities, are man-made by our friends in Europe.” Assuring the people of his commitments, the Uganda president added that his administration is “trying to talk to them quietly.”

Museveni expressed his opinion about the nature of African people, stating that Africans really confuse themselves. If you’re complaining that there’s no bread or wheat, please eat mwogo (cassava). I don’t eat bread myself. “

Museveni, on the other hand, insists that he is unconcerned since his government is putting all resources into salvaging the situation. “I’m not worried. We shall find solutions. We are quietly talking to Western Europe and Russia. We shall brief you (Ugandans) about what we are doing at the right time,” he said, expressing confidence in his administration.

Museveni was speaking at the Kololo ceremonial grounds for the nation’s Labor Day celebrations. Security personnel and employees’ representatives, as well as other Ugandans, were in attendance.

The president’s remarks came after the International Monetary Fund (IMF) warned in the middle of last week that rising food and energy prices sparked by the Ukraine conflict could lead to “social instability” in Africa.

According to the IMF, most nations south of the Sahara are already experiencing a slowdown in economic growth from last year, which will be exacerbated by rising food and fuel prices.

Kenya, for example, is suffering as a result of the crisis.