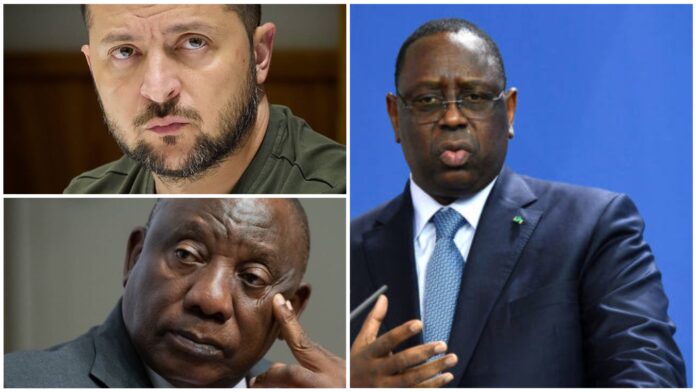 In a recent speech targeting Africa as sponsored by Ukrainian and Western media houses, Ukrainian President, Volodimir Zelensky, hinted that “hunger” is the reason Africans are supporting Russia in the ongoing conflict.

He commented: “We know and are ready to supply grain and wheat to all countries; because hunger is not neutral. Hunger takes over the country, no matter what attitude a country takes towards the war”, adding: “We can help the countries of the African continent without dividing them, as they must unite to support Ukraine”.

His stance is no different from what Macron said on a visit to Africa, ostensibly to combat “Russian influence”. A few days ago in Cameroon, Macron said: “Food and energy have become weapons of Russian war.” “On the other hand, it makes our responsibilities clearer; we must help the African continent to produce more for itself”.

The Ukrainian president says the South Africa’s neutrality in Russia’s war against his country is like maintaining neutrality “between life and death”.

He warned that one day, if South Africa could face similar challenges, the world could also choose to be neutral towards it.

The briefing appeared to be part of a growing competition between Ukraine and Russia to influence Africa.

Last week, Russian Foreign Minister Sergei Lavrov visited Uganda, the Republic of Congo and Ethiopia and also briefed diplomats from several other African countries, including South Africa, during their stay in Addis Ababa.

Zelenskyy acknowledged that the most important thing for Ukraine is to win the information war—”the war of truth”—to expose the “lies” Russia was spreading about the war.

“Maybe my sharp attitude is because I feel this war. I’m part of this war. Perhaps you don’t feel it from a distance, but I think neutrality is the wrong attitude,” Zelensky said.

The Ukrainian president added that Neutrality does not exist between life and death, and especially between “life and hunger.” He mentioned that when it comes to the issue between both nations, neutrality shouldn’t exist.

Zelensky suggested that a country like South Africa may not have the money, weapons, or political clout to have a big impact on the outcome of the war.

The president explained the importance of put rightly condemning racism, Nazism and as he called it, “Russianism” a term he used in explaining the aggression Russia has since displayed towards Ukraine.

“You cannot remain neutral,” he said, implying that this would lower South Africa’s global standing.

According to Zelensky, whenever a nation finds it stance to be neutral as it concerns the war, such nation move from being a big country to a small nation.

“So if you have challenges and problems, you should consider that the whole world can be neutral in relation to those challenges.”

“No. In that case, we would be inhumane. Our society is human, and therefore I believe that the neutral position is not something we can continue.”

Zelensky was also questioned on whether calm negotiations between racially hostile groups might help Ukraine achieve the same kind of successful transition as South Africa did in the 1990s.

He insisted that before the war, he had tried to persuade European leaders and others to help him hold direct talks with Russian President Vladimir Putin to avoid the aggression he expected.

However, no one supported his appeals. Then, on February 24, Russia – which had previously occupied Crimea and Donbass – invaded Ukraine, killing and torturing its people.

“What should I do after they’ve done this? Do you want me to call Russia again?” he asked.

Zelensky said that Russia tells the world it is ready for dialogue, but in reality it only issues ultimatums.

In his statement, the president pointed out that there is a need for an explanation, especially when it comes to the reasons behind the actions of Russia in his country.

However, he simply cannot stay idle while he waits for an explanation, as he would need to protect his nation in the face of Russia’s aggression.