UN To Move 6,750 Migrants From War-Torn Yemen Back To Ethiopia 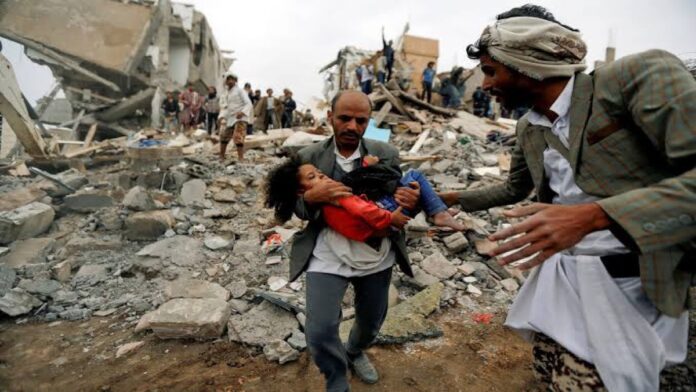 The United Nations Migration Agency stated on Tuesday that at least 6,750 Ethiopian migrants will be transferred from war-torn Yemen to their home country, Ethiopia, in the coming months.

However, the agency requested $7.5 million to help them return home.

So far this year, the International Organization for Migration has moved over 600 migrants to Ethiopia, including 60 unaccompanied minors, on three aircraft.

More flights were scheduled between Aden, Yemen’s southern port city, and Addis Ababa, Ethiopia’s capital, according to a statement released.

In a statement by Christa Rottensteiner, IOM’s chief of mission in Yemen, she revealed that migrants who have currently found themselves stuck in Yemen while passing through or for other reasons are those affected by the “deteriorating humanitarian situation in the country.”

According to the International Organization for Migration, over 27,700 migrants set out on the perilous trek from the Horn of Africa to Yemen last year.

Yemen has been engulfed in civil war since 2014, when Iranian-backed Houthi rebels gained control of the capital, Sanaa, and much of northern Yemen, forcing the internationally recognized government to retreat to Aden, then exile in Saudi Arabia.

The following year, a Saudi-led coalition entered the war on the side of the internationally recognized Yemeni government, attempting to restore it to power.

Houthi insurgents— Recall that the Shiite rebels, with ties to Iran and a history of rising up against the Sunni government, took control of Yemen’s capital and largest city, Sana’a, in 2014, seeking lower gasoline prices and a new administration.

In January 2015, the rebels captured the presidential palace after unsuccessful negotiations, forcing President Abd Rabbu Mansour Hadi and his cabinet to resign.

A coalition of Gulf states led by Saudi Arabia initiated an economic isolation and air strike campaign against the Houthi insurgency in March 2015, with logistical and intelligence help from the United States.

In September 2015, Hadi reversed his resignation and returned to Aden, where fighting has persisted since. In the summer of 2016, a UN effort to mediate peace talks between allied Houthi rebels and Yemen’s internationally recognized government stalled. Hadi is said to be living in exile in Saudi Arabia as of December 2017.

So far, the group actively involved in the Yemeni crisis is the Houthi movement. Ansar Allah supposedly formed the group in the late 1980s as some sort of facilitator for religious and cultural revivalism among Zaydi Shiites in northern Yemen.

The Zaydis, on the other hand, are a minority in the predominantly Sunni Muslim country, but they are strong in the northern highlands near the Saudi border.

After supporting the US-led invasion of Iraq in 2003, the Houthis became politically engaged, initially opposing Saleh but subsequently allying with him after his retirement as president. This was a tactical alliance: Saleh’s supporters opposed Hadi’s UN-backed government and wanted to reclaim leadership in Yemen after feeling marginalized throughout the transition.