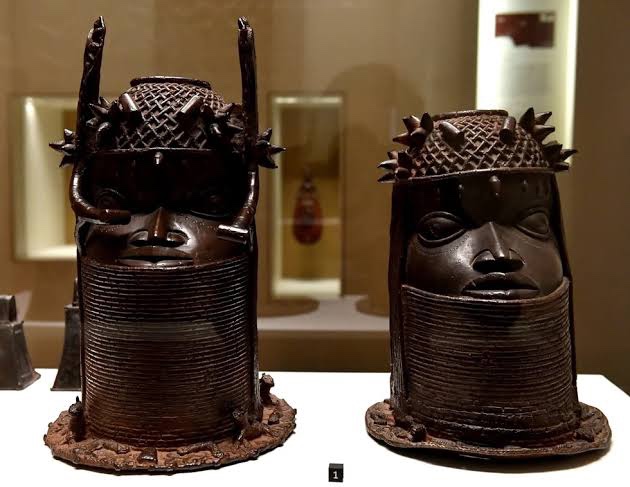 A bronze sculpture of a West African king, which has been in the collection of a Rhode Island museum for more than 70 years, is among 31 objects of cultural value returned to the Nigerian government.

The sculpture, called the Head of a King or Oba, preserved at the Rhode Island School of Design Museum (RISD), was among the objects presented to Nigeria during a ceremony at the Smithsonian Institution in Washington, D.C. on Tuesday.

The Benin Bronzes were stolen in 1897 when British colonial troops invaded and looted the Kingdom of Benin, now located in present-day Nigeria.

“In 1897, the ‘head of an Oba’ was stolen from the royal palace by Oba Ovonranwmen,” Sarah Ganz Blythe, acting director of the RISD museum, said in a statement.

“The RISD Museum worked with the National Commission of Museums and Monuments of Nigeria to bring this sculpture to the people of Nigeria where it belongs,” said Blythe.

Among the pieces stolen in the late 19th century were 29 that the Smithsonian Institution’s Board of Regents voted in June to return to Nigeria and an object from the National Gallery of Art, officials said.

“Through this repatriation, we recognize a legacy of cultural theft and are doing our part to bring African culture back to Africans.”

The Head of a King, believed to be from the 17th century, was donated to the RISD Museum in 1939 by Lucy Truman Aldrich. It was acquired by the Knoedler Gallery in New York in 1935 in a sale of objects from the Kingdom of Benin. The museum said in a statement.

A French customs stamp on the inside indicates it was kept in a French collection.

The RISD museum said the sculpture was almost certainly one of the looted objects, although it was unable to link the piece to a specific French or British collection.

The bronze head represents an Oba or king of the Edo people of Benin in West Africa. The sculptures were commissioned by a new king in honor of a predecessor and placed on ancestral altars in the royal palace, the museum says.
The repatriation is part of a worldwide movement of cultural institutions to return artifacts stolen during the colonial wars.

In August, Germany signed an agreement to transfer ownership of Benin bronzes in its museums to Nigeria. The collection has been described as the most extensive transfer of museum artifacts from a colonial context to date and includes 512 objects that arrived in Berlin after the 1897 sack.

In the same month, the Horniman Museum and Gardens in London announced that it would donate a collection of 72 Benin bronzes to the Nigerian government.