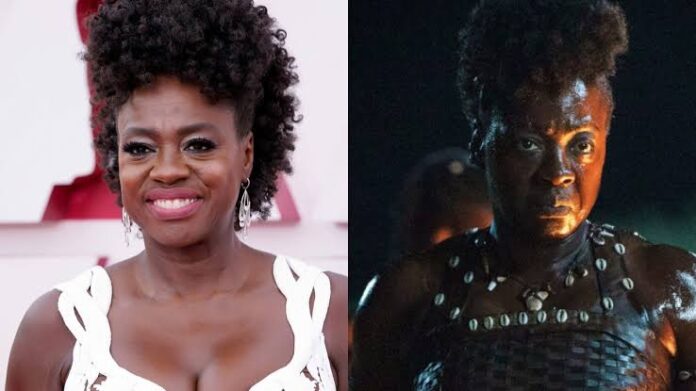 Oscar-winner, Viola Davis leads a fearless African female combat unit into battle in the first trailer for The Woman King, released on Wednesday.

“We have a weapon they are not prepared for,” says an ominous voice at one point in the trailer, followed by General Nansica, played by Davis, emerging from the undergrowth of the jungle and surrounded by Agojie, a group of ready-made African warriors to fight against European invaders.

With nods to Black Panther, the trailer features the female military unit being trained by a fiercely determined Nansica (Viola Davis).

The Woman King is inspired by real events that took place in the kingdom of Dahomey, one of the most powerful states in Africa, in the 18th and 19th centuries.

The story follows Nanisca and Nawi, played by Thuso Mbedu as an ambitious recruit, fighting together against enemies who have violated their honor, enslaved their people and threatened to destroy everything they lived for. “I offer you the choice. Fight or we die,” Nansica tells her fearless recruits.

John Boyega plays the ruler of Dahomey, King Ghezo, who is urged by Nansica to oppose Europeans who want to conquer his kingdom. “They won’t stop until all of Africa is theirs. We must defend ourselves for our people,” she tells King Ghezo.

The Woman King is directed by Gina Prince-Bythewood, who co-wrote the screenplay with Dana Stevens. Production credits are shared by Davis, Cathy Schulman, Julius Tennon and Maria Bello, with executive production by Peter McAleese.

The Woman King will hit theaters on September 16. eOne co-funded the image and will release it in the UK and Canada, while Tristar will be released elsewhere in the world.