Vladimir Putin Claims Russia Has Always Been On Africa’s Side 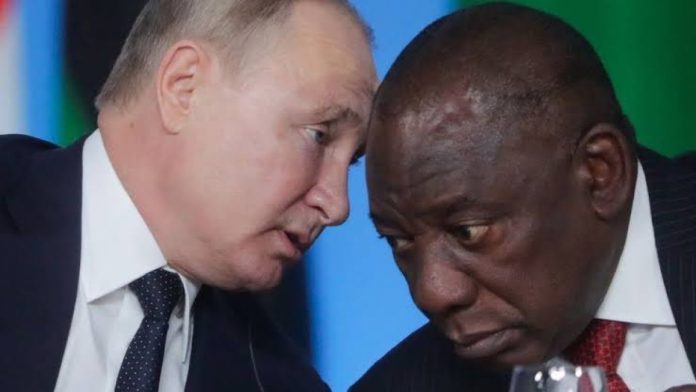 On Friday, the African Union’s top diplomats met with Russian President Vladimir Putin to discuss the conflict in Ukraine and its implications for Africa.

The meeting was considered important due to the Current issues facing the African Continent as Grain export restrictions have exacerbated food insecurity in several African countries, leaving millions of people hungry.

President Macky Sall of Senegal met with Russian President Vladimir Putin in the Russian city of Sochi on Friday to discuss the conflict in Ukraine and its impact on Africa’s 1.3 billion people.

Prior to the war, the continent bought over 30 million tons of wheat and maize from Russia and Ukraine each year. Unfortunately, Exports have been severely affected as a result of the war, which has resulted in a global increase in food and fuel costs.

According to the French news agency, at Friday’s meeting, Sall, the current African Union chairman, pushed Putin to recognize that African countries are “victims” of the Ukraine conflict. He stated that food supply should be “outside” of the sanctions imposed by the West on Russia over Ukraine.

Recall that President of the Africa Development Bank, Akinwumi Adesina, told journalists in Nairobi that the surge in oil prices caused by the war is hurting Africa’s economy.

“You look at the energy prices today, energy prices have gone up to the roof of course which benefits all the exporting countries but you, for example, Kenya, you spend a lot of money importing fuel,” Adesina said. “So fuel made importing countries suffer as a result of that which has a tendency to slow down economic growth,” the Nigerian financial expert explained.

Adesina also expressed his displeasure with Russia’s Black Sea naval blockade, which is preventing millions of tons of Ukrainian grain from reaching other nations, including some in Africa.

In response to the AU diplomats, Russia’s President, Vladimir Putin, described his country’s relationship with Africa as “friendly” because of its past support for the continent in the fight against colonialism and present diplomatic challenges. Putin made these statements during a meeting with African Union leaders Macky Sall and Mousa Faki.

“Russia has always been on the side of Africa. It has always supported Africa in its battles against colonialism. We think that with Africa in general and its individual nations, we traditionally have very good relations,” Putin said.

Read also; Dean at Canadian University Announces that All of their Master’s Law Graduands Are Nigerians