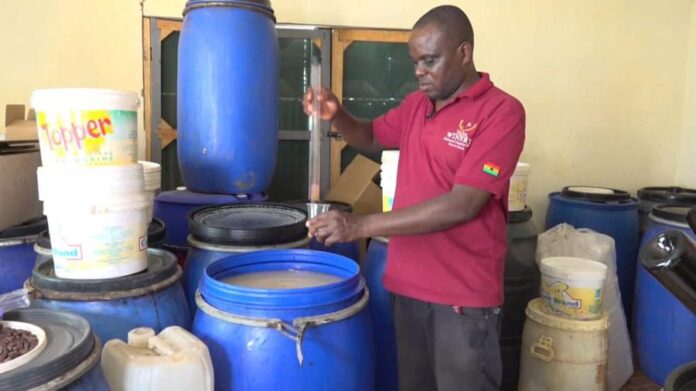 Being one of Ghana’s most commercially exported and economically viable crops; cocoa has served the likes of Dr. Harrison Adjimah who exploits the abundance of cocoa in Ghana to his advantage.

Adjimah started a company called “Volta Winery” that targeted the creation of sweet wine by extracting cocoa; emulating wineries in Italy, that capitalize on grapes.

Dr. Adjimah, who also happens to be a senior lecturer, became a sensation with his entrepreneurial skills. Besides his activities using cocoa, he also encourages his students to be as innovative as he is.

Through his entrepreneurship program, he teaches several students to source local materials to make important and economically viable products.

The senior lecturer and founder of Volta Winery, Adjimah, explained that; he has been in search of ways to prove to his students that it is possible to develop premium products from locally sourced ingredients.

“So, the idea of making wine from cocoa became quite appealing,” Dr. Harrison Adjimah explained.

Apart from the use of cocoa, which has been deeply exploited by Adjimah, cashew, and coffee beans have also proven useful in making refined red and white wines and juice.

Adjimah explained that; “what is so clear is that there are aspects of things in the cocoa that we are not using for anything.”

The senior lecturer made it clear that his actions don’t exactly stop at making wines from cocoa. After making said wine, the cocoa bean remains, serving as another export revenue maker.

The lecturer and entrepreneur has a plan to span the cocoa industry and dominate the scene.

“I am proud to be part of that push as well”, says Adjimah; referencing his participation in what he believes to be a growing industry.

In addition to producing sweet wines, the senior lecturer leverages his branding and packaging expertise to attract additional customers.