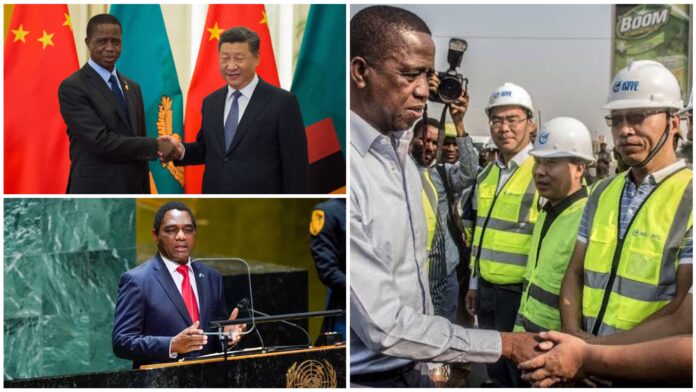 Zambian President has canceled $1.6 billion in agreed but undisbursed Chinese loans, mainly from China Exim Bank and Industrial Commercial Bank of China, to address its debt problems, begins debt relief Negotiation with China to pay off old loans taken by his Predecessor.

The loan is part of the $2 billion in unpaid loans that Zambia canceled from its external creditors shortly before its official bilateral creditors agreed on Saturday to grant debt relief to the South African nation.

The country’s president announced that it had suspended the construction and rehabilitation of several roads, highways, and information and technology projects mostly financed by China Exim Bank after facing difficulties in repaying loans.

“The Government of the Republic of Zambia has taken steps to address current debt challenges beyond the debt restructuring process.

“The cabinet at its meeting on Thursday, has taken steps to halt some loan-financed projects,” Zambia’s Ministry of Finance and National Planning announced on Saturday.

In addition, officials said that some critical projects would be rescheduled to allow critical components to be completed with medium-term budget allocations.

The ministry said it was in talks with creditors and contractors to formalize the termination of construction contracts.

The canceled projects include the rehabilitation of a major highway — the $1.2 billion two-lane Lusaka-Ndola Expressway, financed by the China Jiangxi Corporation — that would link the capital to the country’s Copper belt province. Lusaka ordered Jiangxi, China to cancel $157 million in unpaid loans.

Digital projects such as Smart Zambia Phase II and digital terrestrial television broadcasting systems in Zambia Phases II and III have also been halted as the country struggles to avoid a debt crisis.

Zambia said it had notified Chinese lenders and contractors of plans to cancel outstanding loan balances on 14 projects.

It will also attempt to stop the $333.2 million Smart Zambia Phase II disbursement implemented by Huawei Technologies and financed by China Exim Bank.

The initial phase of the project included the construction of a national data center and a training center for ICT talent. Although, Huawei would still develop Zambia’s national broadband system to strengthen public service delivery at later stages.

The country also asked China Exim Bank to cancel US$159 million intended to finance the construction of Chalala Barracks in Lusaka.