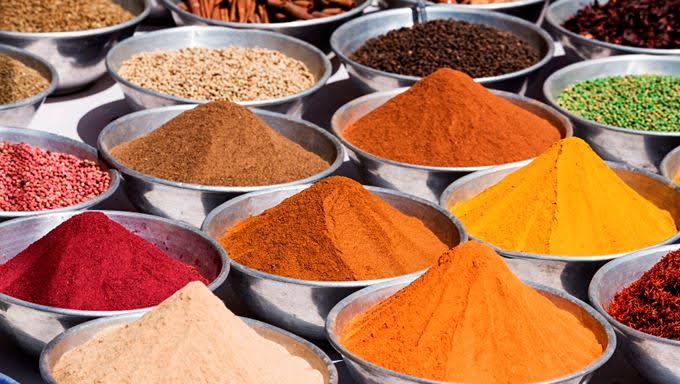 Alnif cumin is typically harvested and processed from the end of April until the beginning of May in the Moroccan village located in the eastern Anti-Atlas mountain range.

The seeds from bundles of hand-cut cumin plants are first extracted, followed by drying, beating, and sieving to remove fine straw and dust.

This cumin species, which is distinguished by outstanding quality and a strong perfume, may be used whole or crushed and is frequently used to improve the flavor of different classic Moroccan dishes including couscous, tajine, and soups.

Additionally, alnif cumin pairs nicely with boiling meat and vegetables. It is highly regarded for its restorative qualities and reasonably long shelf life.

Nigerian tribes have traditionally utilized iru as a fermented seasoning (particularly the Yoruba and the Edo people).

In both fresh and dried forms, whole or mashed, it is made by fermenting and digesting locust beans (Parkia biglobosa).

The tannins that form during the fermentation process are what gives the seasoning its distinctive pungent scents, which are frequently compared to those of stinky feet and terrible body odor.

This is despite the fact that it has an extremely strong smell.

An odd spice mixture called kan kan kan is well-liked in Burkina Faso. It is made up of Maggi bouillon cubes, allspice, chili powder, and peanut powder.

This delicate spice combination is crushed and combined to make it, and it is frequently sprinkled over various grilled meat dishes.

The mixture gets some much-needed heat from the chili powder, a grassy flavor from the peanut powder, and saltiness from the bouillon cubes.

Taliouine saffron is named after the mountain settlement of the same name, which is situated in Morocco’s Souss-Massa region at a height of 1300–1500 meters above sea level and on the Souktana plateau.

Small-scale farmers who are all members of the Coopérative Agricole de Taliouine cultivate the saffron, and the harvest usually lasts from October to November.

This highly valued saffron variety is thought to be the result of an exceptional combination of perfectly suited territory, the region’s unique climate, and the indispensable knowledge of the people who are involved in its production.

It has a more intense flavor and aroma but less vibrant colors than other types of saffron.

Poivre de penja is a traditional pepper variety that comes from the Cameroonian areas of Moungo and Koupé Manengouba.

The berries of the plant Piper nigrum, which has a strong and pungent smell, are where the spice is derived from. The peppers come in green, black, white, and red types.

The size of the peppercorns ranges from little to medium to huge. The aromas are warm and spicy while also being woody, musky, and heavy.

A traditional spice mixture with Levantine and Middle Eastern roots is za’atar. The list of components for za’atar varies from place to region, but common elements include sumac, salt, marjoram, thyme, oregano, coriander, cumin, and the wild za’atar herb, hyssop, which grows all throughout the Levant.

Mitmita is a powdered spice mixture from Ethiopia made up of spices like cloves, cardamom, salt, cumin, ginger, cinnamon, and bird’s eye chile.

Although it is typically used as a dip for dishes with cooked and raw meat, it can also be used as a rub or dusted on various foods.

Mitmita, which is spicier than berbere, is frequently used in foods like kitfo or ful medames.

This spice mixture can be used either dry and powdered or blended with oil to produce a paste.

It is commonly used to add spice and depth of flavor to a variety of stews and meat meals.

Ras el hanout is a spice blend that typically contains up to 40 different spices, while other blends assert that they have over 100.

Ras el hanout literally translates as “top of the shop,” implying that the spice mixture is the best and most luxurious item that a customer can get from the vendors.

The spice blend should include both common and uncommon components including dried lavender, caraway, galangal, a variety of peppers, dried rosebuds, and Japanese white ginger.

It should be aromatic, warm, sharp, and slightly spicy overall. Ras el Hanout occasionally even includes hashish or a Spanish fly.

Duqqa is an Egyptian concoction made of herbs, toasted nuts, and spices including coriander, cumin, and sesame seeds.

These components are combined and pounded into a coarse powder that can be used as a seasoning, salad topping, and bread dip.

Duqqa was formerly a peasant cuisine that was largely used as a spice for bread. It offered fuel all day because of its high protein and fat content.