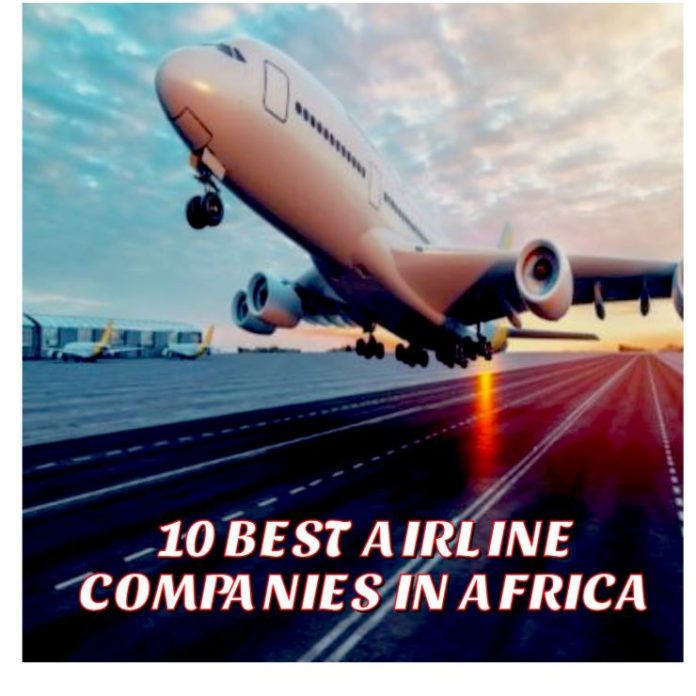 Currently, Africa is experiencing a very positive economic outlook and business is thriving for most of the best airline companies in Africa.

With the seemingly northern trend of investments and the need to move from Cape Town to Accra or Casablanca in the safest, fastest, and most comfortable means cannot be over-emphasized.

Aviation is a crucial accelerator for expansion in Africa’s tourism industry, and the continent’s main airlines are tasked with carrying tourists and businessmen (those without access to private jets throughout the continent).

On the other hand, one can’t overlook the fact that running an airline is a 24-hour business, and the necessity for excellent service is critical.

Despite the issues of poor quality standards, inconsistency, and an aging fleet of aircraft in the aviation industry in Africa, some airlines have been able to deliver quality service to passengers.

Here is a list of the 10 best airline companies in Africa:

Ethiopian Airlines flies to more African destinations than any other airline.

It is one of the industry’s fastest-growing businesses, as well as one of Africa’s most profitable airlines.

Ethiopian Airlines, a proud member of the Star Alliance since December 2011, serves 62 international and 17 domestic destinations.

Ethiopian Airlines has become one of the continent’s top carriers, unparalleled in efficiency and operational performance, thanks to its 70-year history.

Despite a few hitches along the way, it remains Africa’s fastest-growing airline and the only African airline to have 100 or more aircraft in its fleet.

The airline was even recognized by Air Transport World as Africa’s most profitable airline in 2010 hence making it one of the best airline companies in Africa.

South African Airways (SAA) is the country’s flag carrier and one of the continent’s largest airlines, with hubs in Johannesburg and Cape Town.

The carrier is fully owned by the South African government and operates a vast network of domestic and international services throughout Africa, as well as in North America, South America, Asia, Australia, and Europe.

Kenya Airways is a significant African airline that flies to some of the most sought after destinations in the world.

Kenya Airways Ltd., or simply Kenya Airways, is the country’s flag carrier that received an award for Africa’s Best Airline in 2016 and 2017.

Following the demise of East African Airways, the company was created in 1977. The carrier’s headquarters are in Embakasi, Nairobi, with Jomo Kenyatta International Airport serving as its hub.

The airline was totally controlled by the Kenyan government until April 1995, when it was privatized, making it the first African flag carrier to do so.

Kenya Airways is public-private cooperation at the moment. The Government of Kenya is the company’s largest shareholder (29.8%), followed by KLM with a 26.73 percent holding.

Since its inception, the airline has developed immensely and continues to thrive across the African sky as one of the best airline companies in Africa.

Royal Air Maroc is Morocco’s main airline, and it is properly regarded as one of Africa’s greatest airlines in 2022.

It is Morocco’s and Africa’s largest and oldest airline and it presently offers services to 97 destinations, both domestically and internationally.

RAM is wholly owned by the Moroccan government and is based on the grounds of Casablanca-Anfa Airport.

With almost 50 years of experience, Air Mauritius is one of Africa’s oldest carriers.

Air Mauritius has a significant presence in the European, African, and Indian Ocean regional markets; the airline is based at the Air Mauritius Centre in Port Louis, Mauritius, right off the southeast coast of Africa.

With so much coverage over the continent, Air Mauritius as number 5 on the list of the best airline companies in Africa.

Air Seychelles is the national airline of the Republic of Seychelles, with headquarters on the island of Mahé’s Seychelles International Airport. It provides inter-island, charter, and international flight services.

Seychelles International Airport serves as the organization’s primary hub. It is one of the major pillars of the national economy in Seychelles because it is the main driver of tourism.

Abu Dhabi, Antananarivo, Johannesburg, Mauritius, Mumbai, Durban, Düsseldorf, and Paris are among the overseas destinations served by the airline.

Daily domestic flights and charter services are also available throughout the archipelago by Air Seychelles.

Etihad Airways, the national airline of the United Arab Emirates, now owns 40% of the airline.

RwandAir is a Rwandan airline based in Kigali that operates scheduled services across Africa, the Middle East and Europe.

Its main hub is at Kigali International Airport (KGL) and serves as one of Africa’s fastest-growing, newest, and most technologically advanced carriers.

The airline’s objective is to deliver exceptional, safe, and dependable air transportation services, including effectively connecting Rwanda to the rest of the world.

FlySafair is a low-cost South African airline based in Johannesburg, South Africa. The airline specializes in flying domestic flights within South Africa, flying to more than five different destinations across the country.

FlySafair was launched in October 2014, but the firm that owns the airline has been in business for more than 50 years.

EgyptAir, the Arab Republic of Egypt’s national airline, is based at Cairo International Airport.

Domestic and regional scheduled passenger and freight services within Egypt and Africa, as well as international routes to Europe, Asia, the Middle East, and North America, are all part of the airline’s network.

EgyptAir, one of the largest airlines on the African continent, joined the Star Alliance in July 2008. EgyptAir Cargo is EgyptAir’s cargo subsidiary, which serves Europe, Africa, and the Middle East.

The firm was founded with the acquisition of Fly540, an East African airline; flights in Fastjet’s own brand began in Tanzania in November 2012.

Despite the fact that Fastjet Zambia was in advanced planning stages, it was revealed in April 2016 that progress would be delayed until at least the fourth quarter of 2016.

Domestic operations in South Africa are also in the works. The airline now operates four Embraer E145 aircraft across East and Southern Africa as of February 2018.

It has also carried over 2.5 million passengers and has a 90 percent on-time record.

The current strategy is to develop locally incorporated airlines that will run services utilizing a common branding, operational standards, and sales platform in order to satisfy local ownership and other requirements.