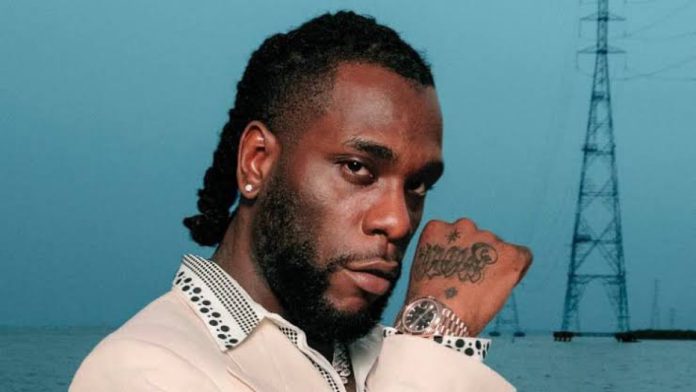 According to reports, two young men identified as Irebami Lawrence, a 27-year-old, and one simply known as Tolu were enjoying nighttime out at Club Cubana in Victoria Island, Lagos state when the incident occurred.

Witnesses claim that Burna Boy, who was also at the club, made advances on one of the club patron’s wives. Sadly, this didn’t sit well with the young men, who immediately took an issue with Burna Boy.

“As things were getting heated, Ibrahim brought out his service pistol and shot multiple times while Burna Boy was laughing,” a senior police official said.

Unfortunately, Lawrence, who stood to defend himself from the harassment, sustained a gunshot wound to the thigh, while his friend, Tolu was struck in the head.

Sources further claimed that Burna Boy left the scene immediately after the gunshots to one of his Lagos homes, after which he fled to Spain.

The five policemen attached to the Nigerian singer have since been arrested by the Lagos police command with suspicion of attempted murder.

According to local media, the singer had entered the club on June 8. While he proceeded in with an inspector who was said to have been on Mufti, four other policemen on standard uniforms stood at a guard outside with the singer’s luxurious vehicles.

According to accounts, Burna Boy was in the VIP section of the club with three women when he noticed another lady. THISDAY claims that the 30-year-old singer then told the inspector, Ibrahim, to ask the woman to join them.

The woman’s husband, however, took issue with Burna Boy‘s attempt to persuade his wife to join him, and he called him out. Despite this, the musician sought to make a second move on the woman, which enraged her husband and friends.

According to the Police PRO, Olumuyiwa Adejobi, an investigation into the issue is being carried out, and prompt actions will be taken as soon as possible.

“We have commenced investigation into this matter. The policemen have been identified and arrested. They have been detained immediately after the incident. The IGP has ordered the CP Lagos, CP Abiodun Alabi, to conclude his investigation and forward the report for necessary action,” Adejobi said.

Adejobi explained that though the artist is yet to be questioned, he will be brought in for further investigation as soon as he returns to the country.