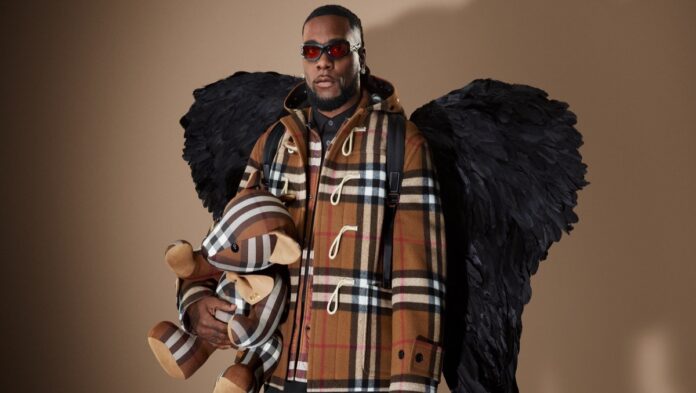 Burberry recently announced that Burna Boy and Colombian singer Shakira will be the faces of its upcoming holiday campaign.

The campaign, dubbed The Night Before, was filmed and directed by Torso Solutions and coordinated/styled by Julia Sarr-Jamois. Both stars wore distinctive looks that displayed the British luxury brand’s logos.

In one segment of the film, Burna Boy can be seen walking through the snow wearing a Burberry coat adorned with exaggerated black angel wings on the back while carrying a bag full of gifts.

Also, read; Davido postpones ‘Are We Africans Yet (A.W.A.Y)’ Atlanta Concert, As He Mourns Death of His 3-year-old Son

Shakira also appeared in the film in a sheer dress adorned with jewels and the brand’s signature words. The campaign features designs by Riccardo Tisci, the famous Italian fashion designer who was a former creative director at Burberry before retiring to relaunch his own brand in early September this year.

This is the first time that Burna Boy has officially collaborated with the brand. The signature jacket with Burberry prints and angel wings was the singer’s first look.

The second set consisted of a jacquard jumpsuit printed and woven with an Equestrian Knight motif, complete with metallic details and glittering crystals. The final look was a well-coordinated black leather coat, matching gloves, white long sleeves, and a black tie paired with matching pants.

Then the African giant completed the look with an umbrella and handbag. Over the summer, the ‘Last Last’ singer performed at the Glastonbury Festival and was one of several hits that made headlines when he contacted Tisci and her team at Burberry.

During the event, Burna Boy wore a monochromatic graphic jumpsuit and paired the look with leather gloves embellished with the Union Jack logo.