The 9 Countries in Central Africa, their Language, Capitals and Population 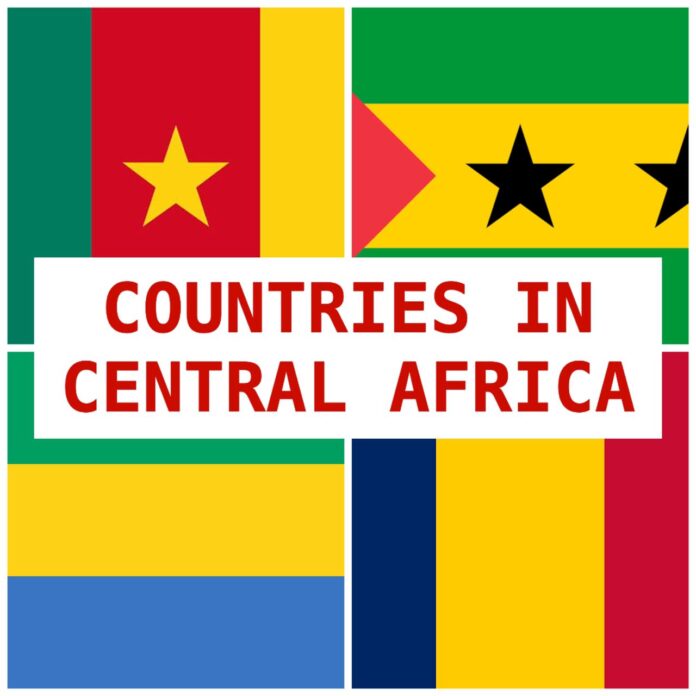 There are nine countries in Central Africa and this area is home to numerous Nilo-Saharan and Niger-Congo Ubangian communities.

Notable Central African supra-regional organizations include the Lake Chad Basin Commission and the Economic Community of Central African States. The two main religions in the area are Christianity and African Traditional Religion.

The center or heart of the continent lies in this area. According to the United Nations’ classification, a total of nine nations make up this region. Only one of the nine nations, Chad, is a landlocked nation.

From 1953 to 1963, the Central African Federation, also known as the Federation of Rhodesia and Nyasaland, included nations like Malawi, Zimbabwe, and Zambia.

The area has seen a lot of internal and external mobility in the past. Consequently, it has witnessed a great deal of cultural blending.

The arrival of the Bantu people in the area is a prime example of such interaction. Similar cultural practices can be found in things like music, body ornamentation, marriage rites, initiation, painting, and dance.

The Mongo and Luba peoples are Central Africa’s two largest ethnic groups in terms of population. It is estimated that there are between 10 and 15 million members in each of these groups.

Significant estimates place the membership of the Kongo and the Kanuri at roughly 10 million. The Sara, Gbaya, Zande, and the Banda are some further communities with sizable populations.

Here is a list of the 9 countries in Central Africa, their language, capitals and population:

Angola is a nation on south-central Africa’s west coast. The Democratic Republic of the Congo, Namibia, Zambia, and the Atlantic Ocean all share borders with this country, which is the seventh-largest in Africa.

The currency of Angola is the Kwanza, which is based in Luanda. Large mineral and petroleum reserves exist in the country. Angola’s official language is Portuguese.

A nation in Central Africa is called Cameroon. Nigeria, Chad, the Central African Republic, Equatorial Guinea, Gabon, and the Republic of the Congo are its neighbors to the west, north, northeast, and south, respectively.

The Atlantic Ocean and Gulf of Guinea’s Bight of Biafra make up Cameroon’s coastline.
With a population of more than 20,13 million, Cameroon has a total area of 475,442 square kilometers.

The official languages of Yaoundé, the capital of Cameroon, are French and English. Cameroon uses the CFA franc as its currency. The country is renowned for its diverse geology and culture.

The population of the Central African Republic, which spans an area of 622,984 square kilometers, is about 5 million.

A landlocked nation in north-central Africa is called Chad. It shares borders with Cameroon and Nigeria to the southwest, Libya to the north, Sudan to the east, the Central African Republic to the south, and Niger to the west.

The official languages of this landlocked country, which has a total area of 1.28 million square kilometers, are French and Arabic.

Chad has a population of 11.27 million people. Chad’s capital city is N’Djamena, and its official currency is the Central African Franc. There are more than 200 different language and ethnic groupings in the country.

The Democratic Republic of the Congo is a nation in Central Africa that goes by the names DR Congo, the DRC, DROC, Congo-Kinshasa, or just the Congo.

It is occasionally referred to by its previous name, Zaire, which served as its legal name from 1971 until 1997. It is the second-biggest country in Africa (after Algeria) and the 11th-largest in the world by area.

It is also the largest country in sub-Saharan Africa. Additionally, D.R. Congo has the highest population density in Central Africa.

This Central African nation, which has more than 82 million people, has Kinshasa as its capital.

The Congo is a member of the CFA. The official language of this country, which has a total area of 2.35 million square kilometers, is French.

The Republic of the Congo, commonly referred to as Congo-Brazzaville, the Congo Republic, RotC, or simply the Congo, is a nation on Central Africa’s west coast.

Five nations border it: the Democratic Republic of the Congo to the southeast; Gabon to the west; Cameroon to the northwest; the Central African Republic to the northeast; the Angolan exclave of Cabinda to the south; and the Atlantic Ocean to the southwest.

The Republic of the Congo has a surface area of 342,000 km2. Its capital is Brazzaville, and its official currency is the Central African CFA franc.

The Republic of Congo is home to over 5.7 million people, most of whom reside in the southwest of the country. French is the official language of the Republic of the Congo.

On the western edge of Central Africa, in a region covering 28,000 square kilometers, sits Equatorial Guinea. Formerly known as the colony of Spanish Guinea, its post-independence moniker refers to its proximity to both the Gulf of Guinea and the Equator.

Spanish is an official language in only one independent African nation, Equatorial Guinea. The nation had an estimated 1.5 million people as of 2015.

The CFA franc is also used in Equatorial Guinea. This nation in Central Africa has a relatively small population of 736,296 people.

Despite having a small population, the nation has vast reserves of oil.

The Gabonese Republic, also known as Gabon, is one of the countries in Central Africa located on the west coast.

Gabon, which is situated on the equator, is bordered to the northwest by Equatorial Guinea, to the north by Cameroon, to the east and south by the Republic of the Congo, and to the west by the Gulf of Guinea.

It has a population of over 2.2 million and a land area of almost 270,000 square kilometers. Libreville is the country’s largest and capital city.

Central African CFA francs are used as the country’s currency. The official language of Gabon, which has a total area of 267,668 square kilometers, is French. Gabon is home to 1.577 million people.

This 964 square kilometer island nation is home to Portuguese speakers. Its capital is Sao Tome, and its official currency is the Sao Tome and Principe Dobra.

Sao Tome and Principe, the world’s smallest Portuguese-speaking country, has a population of about 179,506 people.

In Central Africa, some of the largest ethnic groups include the Luba, Mongo, Kongo, and Kanuri.