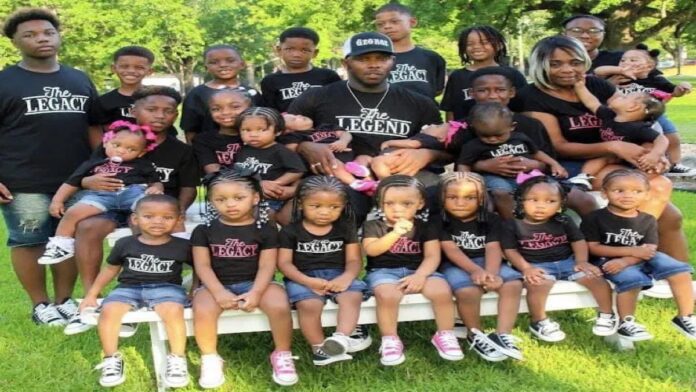 After a considerably controversial post by a social media user and truck driver, Demond George, the netizens have taken to their internet communities to react.

Demond George became the reason for various conversations when he displayed pictures of himself and his children. These images have since made him face backlash from dozens of social media users.

Demond, who has 33 children from various “baby mamas,” did a photoshoot with his kids and released the pictures on social media.

Demond George, who seemed particularly excited as he shared the post, stated that his legacy will continue to live on in perpetuity with the presence of his 33 kids. He also expressed gratitude to his mother and several baby mamas for their assistance in caring for his children.

In a Facebook post that has since gone viral, Demond wrote; “The LEGEND The LEGACY WILL LIVE FOREVER.”

He extended an appreciation to his kid’s mothers who he claims made the day possible.

Interestingly, Demond revealed that nine of his kids were actually not present for the photo shoot. His post has gotten a lot of attention on social media, with some criticizing him for irresponsibly having children.

They also pointed out that he doesn’t make enough money as a truck driver to support 33 children.

In response to the criticism, Demond, who seemed enraged by the remarks, went live on Facebook to blast people who were criticizing him.

He claims that his female partners are aware that he does not pull out during sex and instead thrusts deep into their vaginal canals. “I aint weak. I just don’t pull out. I don’t pull out. I ain’t trying to pull out,” he said.

Watch him speak in the video below:

Several reactions have trailed the post made by Demond George and his follow-up video. Below are some comments from Netizens;

Jade Cooper said: “That’s not something to be happy about. That’s a lot of broken homes.”

Bessy Rae wrote: “Creating a legacy of single mothers and broken homes, this is the sickest sh*t I’ve seen.”

Flow Nathan commented: “This gone be a rich family, in the long run, that’s about 16 incomes lol.”

Jenna Mur said; “Pretty sure he doesn’t know all their names and birthdays. How irresponsible. Kids need present fathers, money is not enough.”

Samy Saky Shaka Shaka commented; “They are healthy and well kept that’s what the kids needs,no matter how many kids you have.”