Zimbabwe In Search of Allies To Allow International Ivory Trade 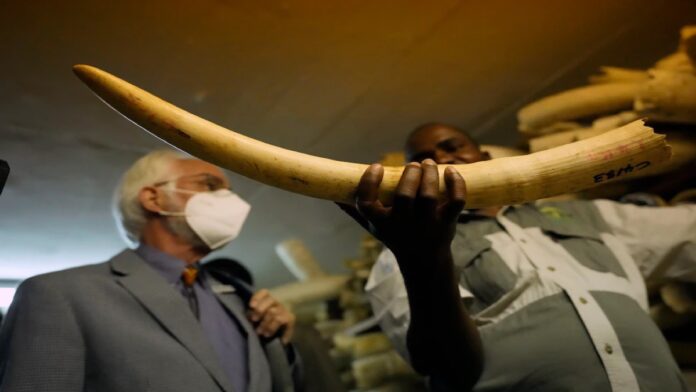 Zimbabwe, which is home to a quarter of Africa’s elephants and one of the world’s only expanding populations of the huge land mammal, is seeking partners to legalize the international trade in ivory, which has been prohibited for more than 30 years.

The country invited 15 countries to a meeting on the subject this week in the Hwange reserve (west), the country’s largest, located on the Botswana border, and a success story in elephant conservation. The park is said to be covered with at least 14,600 km2 of vegetation, indeed a beautiful sight to behold.

The nature park is sometimes referenced to be the size of half of Belgium, but it is overcrowded since enormous areas are required to feed the pachyderms.

As a result of this expansion, human-related actions, incidents, and accidents are becoming more common within the habitat and its wildlife.

According to the government, elephants have killed 60 individuals in the country so far this year, compared to 72 the year before. Elephants have started roaming outside of protected areas. A woman and her baby were stomped to death in the southeast in January.

According to conservationists, the country has roughly 100,000 elephants, nearly double the capacity of its parks. In contrast to other areas where poachers have wiped out the species for ivory, Zimbabwe’s population is rising at a rate of 5% per year. Interestingly, 70% of elephants on the continent live in southern African countries.

Some governments complain about having to pay to secure large stores of ivory obtained through natural deaths or confiscations, claiming that its sale could fund conservation or the shipment of specimens to countries with falling populations.

Since 1989, the Convention on International Trade in Endangered Species of Wild Fauna and Flora has prohibited the international trade in ivory (CITES). In both 1999 and 2008, exceptional sales were permitted.

“It is difficult to find a middle ground,” Tourism and Environment Minister Mangaliso Ndhlovu said in a statement. The minister claimed that locals have shown concern over the seemingly “prioritization of elephants over their own lives.”

Although reports claim that Zimbabwe asked European countries for help selling its $600 million stockpiles last week. The country, which is in the midst of a severe economic crisis, requested a license to trade three years ago with Botswana and Namibia. Unfortunately, CITES in Geneva denied the proposal.

China and Japan are among the ivory-loving countries represented at the convention, which runs until Thursday. Despite the fact that neither the Seychelles nor Madagascar have elephants, they are listed. Kenya and Tanzania, on the other hand, were excluded from the event due to concerns that it might increase poaching.

Around 50 anti-ivory trade organizations signed a statement opposing any effort that would jeopardize the protection of a species on the verge of extinction in some parts of the world.

“The summit sends a hazardous signal to poachers and criminal organizations that elephants are commodities and that the ivory trade may continue, posing a greater harm to the species,” they said.